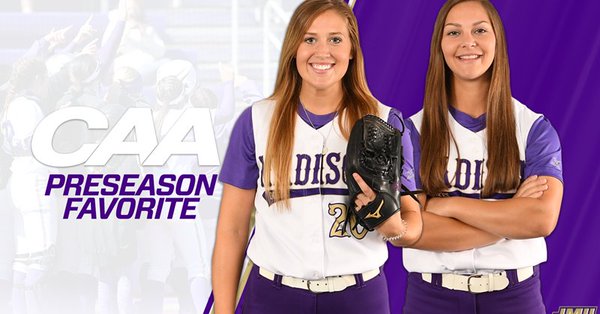 Last season, JMU softball suffered its toughest loss before the year even started. All-American pitcher and infielder Megan Good missed the entire 2018 season with an injury announced just weeks before the season opener. Second-year head coach Loren LaPorte refocused her young group and led the team to a 43-14 record without Good. Now, one of the best athletes in JMU history is fully healthy and poised for a big 2019 season.

The 2018 campaign was JMU’s sixth consecutive season that ended with an NCAA Tournament appearance, but the Dukes want to take another step forward. With a talented group of returning players, the Dukes have aspirations to earn the first Women’s College World Series appearance in program history.

JMU’s roster looks great. Losing Good last season will prove beneficial this season — and not just because Good returns. Several young players were able to step up in Good’s absence last season, namely pitcher Payton Buresch. She took home 2018 CAA Rookie of the Year honors with a 18-5 record and a 1.96 ERA in 153.2 innings. Expect a big sophomore campaign from Buresch.

Pitching is this team’s strength, with Good, Buresch and Odicci Alexander forming one of the best pitching staffs in the country. Matt Weyrich of The Breeze did some good digging to find that JMU and Florida are the only teams in the country to have six consecutive seasons with a team ERA under 2.20. Florida has played in three national championship games during its streak, winning two of those titles. With such tremendous pitching, the Dukes are due for a postseason breakthrough.

The Dukes have every reason to believe they can post a team ERA around 2.20 or below this season with three phenomenal arms in the circle. With one of the nation’s best groups of pitchers, the offense becomes the key to JMU’s long-term success.

Offensive outputs in each of the team’s NCAA Tournament exits illustrate why the lineup — and not necessarily the elite pitching staff — dictate the team’s ability to make the WCWS.

The Dukes aren’t struggling to advance past the NCAA Regionals because of their pitching, it’s been the bats that let the Dukes down in critical moments. Giving up 20 runs in three postseason games last season didn’t help the cause, but JMU needs better hitting in the postseason to advance.

JMU can’t expect to hold NCAA Tournament teams to under three runs in every game. The Dukes need to be able to win games by scoring 5+ runs. If the Dukes can score five runs against SEC teams with their pitching staff, they’ll have a great chance to make it to Oklahoma City. If JMU continues to flounder offensively in the biggest moments, they might still make it to Oklahoma City with its pitchers, but it’ll be a much tougher road.

It’s no surprise that the Dukes are expected to win the CAA. Since 2013, the Dukes are 107-11 against conference foes. Assuming Megan Good stays fully healthy, the Dukes should win the CAA regular season title and stand a good chance of winning the CAA tournament title as well.

Megan Good – This one is obvious. The redshirt senior is one of the country’s best players. If you watch JMU softball, you’ll see Megan Good quite a bit. Keep an eye on how LaPorte uses Good in the first 15-20 games. Will the team’s lone senior yield innings in the circle to Alexander and Buresch to stay fresh for the postseason? Will she receive any games off early in the season to make sure she’s rested coming off her injury?

Watch Megan Good’s usage early in the season to get an idea of the strategy the team has moving forward.

Sara Jubas – The sophomore shortstop is expected to be the team’s leadoff hitter. The best offenses in college softball almost always have a superb leadoff hitter. Jubas hit .301 last season and added seven homers to go with another seven steals.

She’s a talented hitter with a bit of pop and good speed. She’s critical to JMU’s offensive success. If she gets on base, the trio of Kate Gordon, Alexander and Good will drive her home.

Madison Naujokas – Last season, Naujokas underwent a sophomore slump. After batting .288 as a freshmen, she batted just .206 last season. Despite the inability to get hits, she led the team in stolen bases (11) and walks (28). She put together an on-base percentage of .360, which was actually a better mark than Jubas’ despite a batting average nearly .100 points lower.

Kierstin Roadcap – Roadcap underwent a sophomore slump as well, with her batting average dropping nearly .60 points last season. If the Dukes get Naujokas and Roadcap to produce at the bottom of the lineup, the 2019 season could be special. Also watch for Roadcap to help the team as a catcher. Her relationship with the three pitchers will be crucial to the team’s success.

We won’t go through all 53 of JMU’s games, but we’ll hit the highlights.

The out-out-conference games are challenging. The Dukes play Oregon, Tennessee and Kentucky within the first five games of the year. The other two games against Cal and Florida Atlantic make the first five games a tremendous challenge. We’ll quickly learn what this JMU team is made of.

Matchups with Michigan, Minnesota and Arizona will also be difficult games. While some of the 32 non-conference games are tough, a good amount of those games are winnable. Expect a few losses, but the Dukes should put up 22+ wins outside of the CAA.

The Dukes have 21 CAA games on the schedule and most of them will result in wins. As mentioned earlier, JMU is 107-11 against CAA opponents over the past six years. I’d be surprised to see JMU lose more than three conference games. Expect 18+ CAA wins.

I think JMU’s floor in 2019 is 40 wins. I’d put the regular-season ceiling at 50 wins. I have JMU getting closer to its ceiling and finishing 47-6 in the regular season.

This team is good enough to make the Women’s College World Series. The pitching staff will be among the best in the country. If the Dukes get production from the top and bottom of the lineup, this team becomes a national title contender. If the Dukes rely solely on the middle of the lineup and their pitching staff, the Dukes will settle for an NCAA Regional appearance.