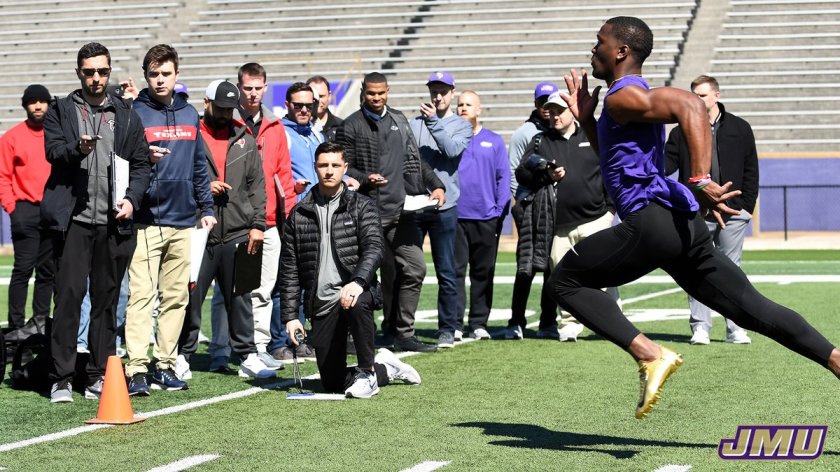 Jimmy Moreland’s stock – The star cornerback drew most of the scouts, and Moreland impressed. He ran a 40-yard dash in the 4.4 range and looked strong in his drills, according to most reports. We would be stunned if Moreland doesn’t get drafted. Our best guess says Moreland falls somewhere in rounds 3-5, although there’s a chance he slips to the sixth or seventh round. Given his stats, film and speed, it’s hard to imagine Moreland not getting selected. He makes sense as a middle-round pick.

Other rising stars – In addition to Jimmy Moreland, running back Marcus Marshall and wide receiver David Eldridge both performed at a high level. Marshall showed quickness and strength. When healthy, he’s a problem for opposing defenses. I don’t expect Marshall to get drafted, but I wouldn’t put it past him to earn a few different mini camp invites. For Eldridge, the numbers on the field aren’t quite there. He has good hands and speed, but it’ll be tough sledding for a player who didn’t produce at an elite level as an FCS wide receiver to make an NFL roster.

Sleeper – Robert Carter Jr. is a special teams demon. While it seems like kickoffs are slowly being phased out of the game, Carter Jr. is a unique athlete that may receive a chance at an NFL mini camp.

The bottom line – Jimmy Moreland is JMU’s best pro prospect this season, but it’s great for some of the seniors to showcase their skills in front of scouts. As the talent level coming to JMU increases, expect future Pro Days to garner more NFL attention.