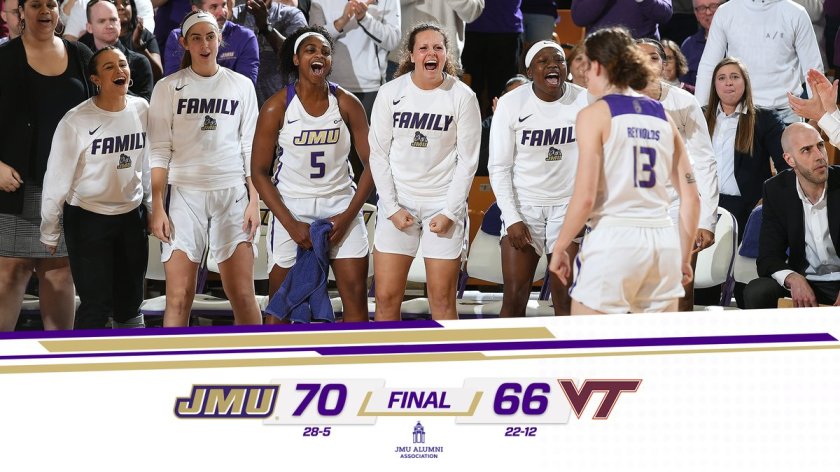 That was fun – Whether you’re a JMU or Virginia Tech fan, you have to admit Thursday’s game was enjoyable. Both teams played hard, made tough shots and wanted to win. In the end, JMU committed fewer turnovers, played tough defense and pulled out a gutsy win over the visiting Hokies.

Stopping shooters – JMU held a great three-point shooting team to an 8-23 mark from beyond the arc, and the Hokies made just two of their final eight shots from deep. Strong defense let JMU stay alive in this game and ultimately pull out the win.

All hands on deck – Seven Dukes tallied at least five points, and three of those seven players reached 10 points. JMU didn’t just rely on Kamiah Smalls, as Jackie Benitez, Logan Reynolds and Devon Merritt all played well. Kayla Cooper-Williams had a team-best +/- of +11. JMU won because it played a team game.

Heart – JMU wanted this game badly. That’s not to say that Virginia Tech didn’t want to win, but you could tell how much this meant to JMU’s players. The Dukes outscored the Hokies 40-16 in the paint. The Hokies are a talented bunch and so is JMU. It was the Dukes’ effort and energy that pushed them over the top. Sean O’Regan’s group plays hard, and Thursday was a perfect example of what makes this team special.

Up next – Winning the WNIT is a legitimate possibility. The Dukes host Georgetown on Sunday at 2 p.m. JMU beat the Hoyas 69-57 earlier this season. A win moves JMU to the WNIT Final Four. We’ll discuss that Monday if the Dukes advance.