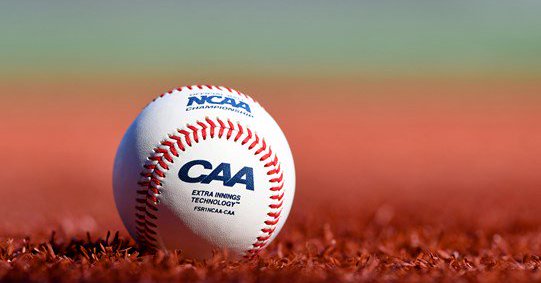 The Colonial Athletic Association is a mess. While Elon, Charleston and Northeastern begin to separate themselves from the rest of the conference, the remaining six teams all find themselves preparing for a royal rumble with the winners earning a trip to Veterans Memorial Park for the CAA tournament.

James Madison University enters the weekend in last place but is just one game out of fourth place. How much longer will every single team remain mathematically in the hunt for a CAA tournament berth? A very long time.

In Baseball America’s latest postseason projection, only one CAA team is predicted to make the NCAA Regionals and that’s the projected tournament champions, the Elon Phoenix. Elon is tagged with a four seed in a regional with Georgia Tech, Auburn and Illinois State.

Only four CAA teams have an overall winning record and quality nonconference wins are few and far between. Against top-ranked competition, CAA schools have proven to be no match. However, a dominant pitching staff, which many schools in the CAA have, will carry you a long way in the postseason.

There are four weekends left in the regular season. Who has the inside lane in this race? Who’s running out of gas?

As the season moves along, Elon gets better. It has already taken down Charleston, put up 30 runs in three games against William & Mary, held Delaware to just two runs in that series, swept JMU and rebounded from a bad loss to Towson with a 16-run performance.

Ty Adcock has reached double-digit home runs, Joe Satterfield is hitting .372, and any weaknesses in this lineup are made up for in other areas. The combination of George Kirby and Kyle Brnovich have 152 strikeouts in 125 innings, and the rest of the pitching staff is improving. Until another team can challenge the Phoenix, they are far and away the best team in the CAA.

After initially struggling to win on the road, the Cougars have won seven of their last eight away from their home field. Their lineup cannot be matched in the CAA, leading the conference in batting average by 19 points (.279) and sitting atop the conference in slugging percentage and stolen bases. They stay home this weekend to take on a free-falling UNCW team.

Friday-night starter Griffin McLarty will look to rebound from one of his worst starts of the year, giving up three runs on seven hits and striking out just four in seven innings against Northeastern. Yeah, he’s that good.

The Huskies have now lost two-straight series in CAA play, however, they held Charleston to just 15 runs in three games, scoring 14 themselves. A big series against Elon looms where one of two things will happen, either Northeastern takes the series and provides more separation between the top and bottom of the conference, or the Huskies drop their third-straight series and join the jumbled mess that is the rest of the CAA.

Hear me out. JMU had the CAA bye last weekend and won two games against St. Bonaventure at home before taking UVA to the wire on the road (ultimately falling by a score of 2-1). Wins against the Bonnies aren’t sexy. They were the most boring baseball team I’ve watched in years and argued a lot for a team that refused to swing a bat. The Dukes didn’t just win these two games, they finally dominated a weaker opponent. JMU is now rested, winning and gets the Hofstra Pride at home for three games.

The Pride are coming off a sweep against UNCW, but their offense is anemic, hitting just .213 on the year. JMU has, arguably, the strongest pitching staff in the conference. If the Dukes play as they did against St. Bonaventure, which wasn’t special and was simply a matter of executing JMU baseball, the Dukes will be sitting pretty.

UNCW has been the most up and down team in the CAA this season. It has a dangerous lineup, but the offense has cooled, the pitching has faltered, and the wins have stopped coming in. The Seahawks were swept by Hofstra last weekend, a team who entered the series with just two CAA wins. Greg Jones remains hot, hitting .338 with 17 extra-base hits and 27 stolen bases, but he can’t do it himself. They get Charleston this weekend. A desperate UNCW team may be a dangerous UNCW team.

I thought I knew baseball, until Hofstra came along. The pitching staff isn’t good and neither is the lineup. Pride hitters have combined for a .213 average, while the pitching staff sports an ERA above 6.00 and has allowed opponents to hit nearly .300, yet the Pride are in a three-way tie for fourth place in the CAA. Hofstra visits Harrisonburg this weekend in a must-win series. Elon awaits next weekend.

Delaware gets the bye this weekend, taking on Villanova instead. The Blue Hens dropped two of three against Towson last weekend and now find themselves tied with the Tigers and UNCW for fourth-place in the CAA. Playing a big game of “what if,” if Hofstra falters against JMU and UNCW continues to struggle, the Blue Hens will take on the Seahawks next weekend with an opportunity to increase their odds of making the CAA tournament from “absolutely no chance” to “as long as they don’t go winless from here on out, they are in.” Again, I thought I knew baseball.

The Tigers are coming off a big series win against Delaware and a nonconference win against UMBC. They get William & Mary at home this weekend in a must-win series. Towson is 4-18 on the road and gets JMU and Charleston away over the next two weeks. Towson pitchers have a league-high ERA of 6.35 and have given up 38 home runs with plenty of high-powered offenses remaining on the schedule. It’s going to be tough, but we’ve already seen that anything is possible.

William & Mary won just three CAA games last season, so 2019 can already be declared an improvement, however, it initially appeared as if this year was going to be a special one for the Tribe. Unfortunately, the magic may have dried up. As a team, they are falling down the CAA statistical leaderboards and are 1-8 since sweeping UNCW and starting a chain reaction of massive CAA upsets. However, they travel to Towson this weekend where, if the pattern continues, the Tribe will sweep and nothing will continue to make sense. The starting rotation is strong, so don’t count out the Tribe just yet.