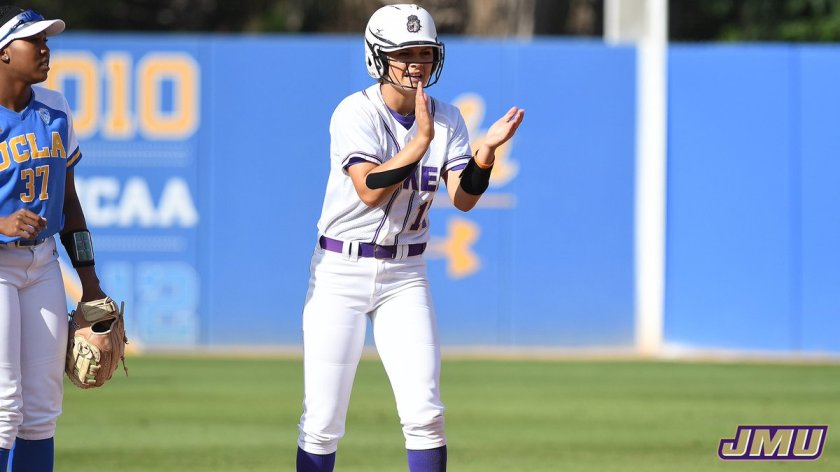 (Correction issued on 6/3 at 8:17 p.m.: A previous version of this article said Hannah File led the team in errors, which was incorrect. Yes, we made an error when talking about errors. We’ve updated the article to reflect the accurate information. Our apologies for the mistake.)

With one swing of the bat, UCLA’s Rachel Garcia sent her Bruins to the Women’s College World Series Championship. The National Player of the Year candidate smacked a three-run blast in the bottom of the 10th inning in a 0-0 game against Washington to send UCLA into the championship series. There’s a chance JMU softball’s 2019 season ended against the eventual national champion. Even if the Bruins falter in the championship series, JMU’s season ended against a top-2 team in the country.

While JMU softball wasn’t quite to the level of UCLA in 2019 — we learned that in Los Angeles — there’s something to be said for your season coming to an end against a national power in a Super Regional. JMU started its softball program in 2002 and less than 20 years later fans, players and coaches have their eyes on Oklahoma City and the Women’s College World Series.

The Dukes lose Megan Good to graduation — and the professional ranks — but they’re expected to return every other player from their 2019 team. With a loaded roster from a Super Regional team coming back, can JMU softball make the Women’s College World Series in 2020? It’s possible, and here’s how the Dukes can pull it off.

Oklahoma and UCLA entered the NCAA Tournament as the top two seeds. The Sooners and Bruins are also No. 1 and No. 2 nationally in team ERA. Those two teams will play for the national title this week.

Of the 13 Women’s College World Series games so far, every winning team has held their opponent to three or fewer runs. More often than not, great pitching beats great hitting. Despite losing Good, JMU will have a solid pitching staff heading into 2020. Will it be good enough for the Dukes to make the WCWS?

Odicci Alexander, a two-time CAA Player of the Year, will be the Dukes’ ace. She posted impressive 2019 numbers.

Alexander is an elite two-way player, much like Good. She’s not quite as dominant as Good in the circle and doesn’t have quite the same velocity, but she’s one of the better pitchers in the country heading into 2020. Alexander is joined by Payton Buresch, a rising junior becoming more comfortable at the collegiate level. She did well in limited 2019 action.

Buresch isn’t quite Alexander, but she’s a more than serviceable option, especially against CAA teams. She won CAA Rookie of the Year honors in 2018.

Both pitchers will benefit from another offseason in the strength and conditioning program, which might help them boost their velocity a bit. For Buresch to become more effective against top teams, she’ll need to raise her strikeout rate significantly. Both pitchers also need to be ready for much heavier workloads in 2020, as Good’s 190 innings pitched are ready to be dispersed. Expect workloads similar to 2018, when Alexander and Buresch combined to toss 379 innings with Good sidelined due to injury.

With Alexander and Buresch taking over the majority of the workload, the Dukes have a few key questions that need to be answered in 2020.

It’s worth noting that Alexander has improved every season of her JMU career. She’s a completely different player than she was her freshman season, and there’s reason to believe Alexander can become one of the country’s best pitchers in 2020.

The pitching staff has questions with Good leaving, but if Alexander and Buresch both take steps forward, the Dukes should have one of the 20 best pitching staffs in the country.

Statistically, JMU possessed one of the country’s best offenses in 2019, but the Dukes were far from dominant against elite foes. The Dukes hit home runs at an amazing clip and finished the season with 102, but relying on the long ball against teams like UCLA and Michigan wasn’t always a perfect strategy.

Even with a few questions, JMU’s lineup returns everyone except Good, and the Dukes can be just as lethal from the batter’s box in 2020 as they were in 2019.

Kate Gordon, who smoked 23 homers in 2019, leads the way as the Dukes’ top returning hitter. Players like rising juniors Sara Jubas, Logan Newton and Hannah File are all expected to remain key contributors in the 2020 lineup. JMU’s lineup is scary. Here are a few key names the Dukes are expected to return next year.

JMU’s 2020 lineup will be one of the nation’s best. There’s no doubt the Dukes can hit, but there are a few questions the lineup needs to answer to make the 2020 WCWS.

Despite an elite lineup, the Dukes need to hit better against top competition to make the WCWS. JMU is going to score a lot in 2020, but can the Dukes score enough when it matters?

Loren LaPorte and the rest of the coaching staff do a great job developing players, which bodes well for the team’s 2020 performance. With almost the entire lineup returning and using another offseason to develop, the Dukes’ 2020 lineup will be one of the deepest and most dangerous in all of softball.

The Dukes improve their fielding

According to the most recent update of national stats on the NCAA’s website, JMU ranks 71st in fielding percentage as the 2019 season comes to a close. UCLA is 24th nationally and Oklahoma is second. The Dukes’ fielding is a weakness that can be easily improved through practice and defensive adjustments.

Sara Jubas, a rising junior, led the team with 15 errors. Hannah File, a rising junior, finished second on the team with 10 errors. File improved throughout the season and should only continue to improve defensively the more time she spends at third base at the collegiate level. Both Jubas and File are talented defenders who are more than capable of raising their fielding percentages in 2020. Their error totals aren’t a major concern as most shortstops and third basemen will led their teams in errors due to sheer volume of balls hit their way. Even so, I believe both players will lower their error totals and raise their fielding percentages significantly in 2020.

With nearly everyone returning, it’s reasonable to believe the Dukes’ defense can become one of the 50 best defenses in the country in terms of fielding percentage.

Fielding is one of the most underrated reasons why JMU came short of the WCWS in 2019. Errors and slight defensive mistakes proved costly in losses to Michigan and UCLA in the NCAA Tournament. The Dukes did enough to get by the Wolverines despite a few defensive lapses, but the Bruins made JMU pay for errors.

In an early season game against a nationally-ranked Arizona squad, the Dukes were an out away from beating the Wildcats. A miscue in the field allowed the Wildcats to stay alive and eventually beat the Dukes. Errors killed JMU throughout the season.

JMU lost 10 games in 2019. The Dukes made an error in nine of their 10 losses and 18 total errors in their losses. That’s 18 errors in 10 losses compared to just 35 errors in 51 victories. When the Dukes lost, it was largely because they beat themselves.

If JMU can become a top-20 defensive team in 2020, there’s a very real possibility that it returns to a Super Regional and has another shot at making the WCWS. If the Dukes remain outside the top 50 in fielding percentage, the loss of Megan Good is going to loom even larger. Giving teams extra outs is a recipe for disaster, especially when you no longer have the best pitcher in program history to get out of jams.

All eight of the teams in this year’s WCWS are in the top 36 nationally in fielding percentage. The Dukes’ biggest area for improvement is arguably the one area of the game that’s the easiest to improve with practice. That’s the good news for JMU.

We’re way too far out to make a prediction, but there are a few reasons for JMU fans to be optimistic about the Dukes’ chances to end the 2020 season in Oklahoma City.

Don’t get carried away, though. JMU rarely gets respect from the NCAA Selection Committee, so earning a seed in 2020 is going to be a major challenge. Making the WCWS without a seed is a daunting task. And, of course, JMU loses Megan Good. She’s arguably the best athlete in JMU sports history, and she made everyone on the team better. Replacing her ability and leadership isn’t going to be easy. If the Dukes couldn’t make the WCWS with her, how are they going to get there without her?

If there was ever a year to replace a legend, it’d be 2020 for JMU softball. The Dukes return a boatload of stars and are fresh off a Super Regional appearance. If the pitching stays elite (this is easier said than done), the lineup keeps doing what it’s been doing and the fielding gets better, the 2020 Dukes have a chance to be the best JMU softball team in history.