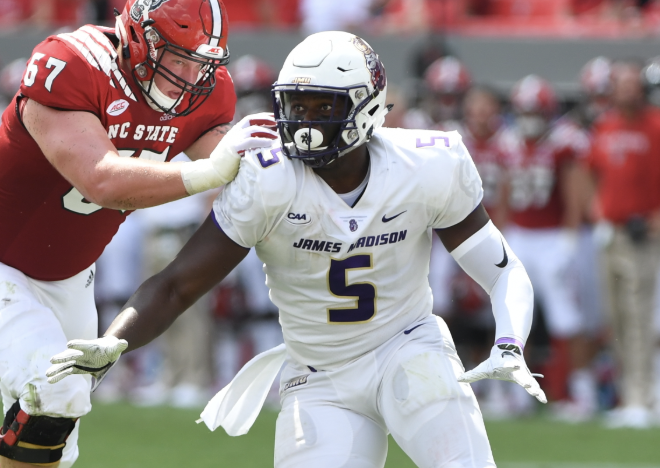 I don’t love reading traditional game previews, especially for season openers. I don’t know what to expect when JMU and West Virginia play Saturday. Nobody does. I know JMU looks good on paper, but I don’t know what exactly we’ll see on either side.

I’ve already discussed each team’s roster in detail. I wrote about being a JMU football fan. Jack wrote a week-by-week prediction piece. I even outlined how to watch Saturday’s game. What else is there to talk about in a game preview when we’ve hit a lot of angles already?

Instead of giving you more discussion on JMU’s offensive line or West Virginia’s depth at running back — you can see all of that in the roster breakdown — let’s focus on a key concept that gets to the core of what JMU fans really care about this Saturday. JMU winning the game.

JMU fans want to know if the Dukes can win. That’s it.

College football is about much more than winning and losing, and fans will enjoy this weekend for more reasons than the on-field product, but nobody reads a game preview if they don’t care about the game’s end result. So let’s just talk about that.

The answer is a resounding yes. The Dukes are loaded, and they bring in a talented new coaching staff. JMU’s starting quarterback is a redshirt senior FBS transfer. The Dukes feature six FBS transfers in key roles across both sides of the ball. Their offensive line is experienced and large. The defense has multiple NFL prospects. That’s a recipe for a tasty FCS-FBS upset.

We could end the game preview right there. JMU can beat West Virginia. It doesn’t mean the Dukes will emerge victorious, but they’re good enough to win.

What would a JMU win over West Virginia mean for the program?

To get to the heart of FCS-FBS matchups, we have to discuss what a win means for the “little guy.”

JMU is an elite FCS program, but North Dakota State still holds the crown as the king of FCS football. The Bison are 9-3 against FBS teams since 2006, with six consecutive wins. By most accounts, this NDSU program plays like an elite Group of 5 squad. Heck, they’re a solid Power 5 squad on most days. There’s national respect for the Bison.

JMU doesn’t receive that same level of respect, and it shouldn’t. The Dukes haven’t won seven titles in eight seasons. With that said, this JMU program is no joke.

The Dukes have three FBS wins since the start of the 2010 season, and they’ve played in two national titles, winning one. Still, the Dukes are in the conversation with teams like Eastern Washington, South Dakota State and UC Davis this season.

EWU has 10 playoff appearances since the start of the 2004 season, including a national title victory in 2010. The Eagles made the title game last season, and they have five seasons of at least 11 wins in the last seven campaigns. They’ve built a steady contender as well. What makes JMU any better than Eastern Washington? Is JMU’s program better than Eastern Washington’s? The Dukes deserve to be in the conversation with the second tier teams.

JMU would love to jump up a notch in the minds of FCS fans, media members, players and coaches. A late-August win over a Power 5 squad helps that. A win positions JMU for a special 2019 season that could help bring it even more attention at the FCS level. If JMU wants to reach NDSU level, the Dukes need FBS wins and national titles.

If you’re against JMU moving to the FBS, you’re likely against this thought, but it’s hard to imagine JMU not picking up the phone if the AAC calls. Right now, the AAC doesn’t seem overly interested in JMU.

Would a win over West Virginia change that? Probably not, but it sure doesn’t hurt. The AAC has a tough slate of games vs. Power 5 teams this week.

If the game lines hold true, the AAC will go 2-4 against the Power 5 with two close wins and four double-digit losses. There’s a chance the AAC goes 1-5 or even 0-6 against the Power 5 this weekend. JMU beating a Power 5 squad would attract national coverage and interest, and you better believe the AAC would notice if the Dukes knocked off the Mountaineers on a bad weekend for the American.

Again, I’m not saying JMU winning or losing makes any massive difference in its case to join the AAC, but a win helps JMU’s national perception. On a weekend that looks like it might be rough for the AAC, that would at least make for some interesting internet dialogue.

A fantastic decade against the FBS

North Dakota State is known as an FBS giant slayer. People understand how dynamic the Bison are against FBS squads. JMU hasn’t had quite the success, but a win over West Virginia would cap the decade off nicely.

The Dukes are 3-6 against FBS teams since the start of the 2010 season, and the game over Akron easily could’ve been a win. Since 2015, the Dukes have been at least fairly competitive in each game. UNC blew the Dukes out by the end of the 2016 game, but not before JMU led 21-14. The Dukes had chances to beat NC State last year, but came up short. They’ve been good in these FBS games.

If JMU beats West Virginia, it caps off a 4-6 decade against FBS teams with three wins in the last five seasons, and a 2010 win over a ranked Virginia Tech team. A 3-7 record isn’t bad, but a win over WVU would be the icing on the cake to a solid decade against FBS foes.

This game is an opportunity for JMU. If the Dukes lose, there’s not much of a downside. All of their goals remain in front of them, and they’ll get ready for FCS play regardless. If they win, they immediately elevate their status and garner national attention. JMU holds a great opportunity in its hands Saturday. Will the Dukes capitalize on it?