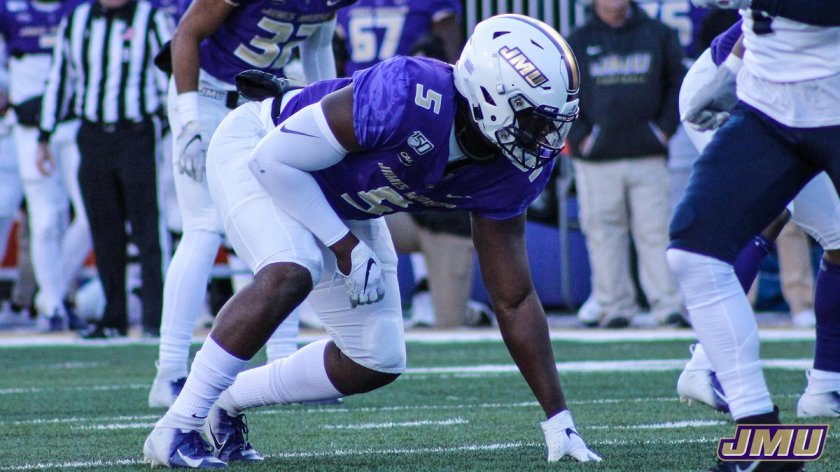 JMU cruised past Monmouth 66-21 in the second round to reach the FCS quarterfinals.

The Dukes host UNI tonight at 7 p.m. on ESPN2. The winner makes the FCS semifinals.

JMU beat Monmouth 66-21. What’s your biggest takeaway from the win?

Jack Fitzpatrick, JMU Sports News: Hi, I’m back! After completely forgetting to do this last week I am ready for this.

Without a doubt, it was this JMU defense. Coming into this game we all knew Monmouth’s offense was good, and probably one of the better rushing attacks the Dukes have seen all season. Well what did they do, outside of the one 93-yard run by “Pete,” JMU held the nation’s best running back to just 14 yards on ten carries.

This defense blew me away. Daka was in the backfield almost every single play and Ron’dell was doing Ron’dell things and controlling the line of scrimmage. This defense looked the part of a national championship team and played a level that I would argue is better than any other FCS team. And after the shaky start to the season, especially on the back end, it is very refreshing to see a dominant performance like on Saturday.

Bennett Conlin, JMU Sports News: JMU possesses superior talent and coaching than most teams in the FCS. The Dukes have two of the best defensive players in the entire country on their defensive line, Ben DiNucci is the CAA Offensive Player of the Year, and Percy Agyei-Obese is an underrated running back.

Curt Cignetti knows how to lead a program, and the assistant coaches are among the best in FCS football. The Dukes are just flat out better than most teams. Monmouth had a decent squad this season, but the Hawks were no match against the Duke doggies.

Last week, I wrote about how all JMU would need to win this game was a stop or two. Well, I was pretty much exactly right. Monmouth’s offense could have scored nine touchdowns on eight possessions, and JMU still would have won this game. Let’s see JMU play against a slightly better opponent before we all start freaking out. Monmouth has a great offense, but it’s not a great team. Let’s see if the Dukes can win a couple more before we all start holding our breath.

If you had to choose one reason why JMU will make it to Frisco, what would that reason be?

Jack: I’m really going to build on what Chase said about consistency, except I’ll focus on the word best.

Look, this team from the trenches to the skilled positions to the quarterback to the coaching staff is the best in the nation right now. They have been building all season and after what we saw on Saturday against Monmouth, I will say this team is peaking at the right time. JMU is scary talented across the board, and their one weak spot, the secondary, is still a top secondary in the FCS the second half of the season.

This team is better than UNI and Weber/Montana. Each one of those teams has their niche, they do one thing really well. And that is why JMU will make it Frisco for the third time in four years, they do it all the best and the most consistently.

Bennett: The offensive and defensive lines. Skill position players can have bad games, but it’s harder for the big men in the trenches to have off games. When they’re as strong and athletic as they are, there’s not much opposing lines can do to stop them.

Chase: Because they’re consistently the best team in FCS Football in 2019. And the key word there isn’t best, but consistently.

What makes North Dakota State different than the rest of the subdivision? It’s because they’re routinely great every single week. Curt Cignetti has some of that to Harrisonburg; his team quietly casually posts monster performances, and then they leave the field and come back to do it again the next week. Any team can look great on a given weekend. Weber looked incredible against Sacramento State. Montana looked incredible against Weber. Montana State looked great against Montana. But what kind of consistency to those three teams have week-to-week? (I would argue it’s the Bobcats that are the steadiest, but that’s another conversation for another day.)

There’s a lot of elements you could highlight to answer this question, but to me, it’s the fact that JMU has clowned good teams pretty regularly for the better part of the last eight or nine weeks. Not to tip my hand, but I don’t see that changing this weekend.

If you had to choose one reason why JMU will fall short of making it to Frisco, what would it be?

Jack: Can I say nothing?

I know there is the mantra in football “any given weekend.” But with this coaching staff and this senior-led team, I just don’t see that being a thing. Of course, if they have another game like Colgate last year where they are giving the ball away 5+ times than the other team has a chance, but even then it may take more than just a lot of turnovers the way this defense is playing. I really don’t see this train being derailed until maybe next year.

(Saves this take for when they do get derailed and this becomes a freezing cold take.)

Bennett: I’ve said before that turnovers are really the only issue that can keep the Dukes from winning. A slow start against a team like NDSU could also play a factor, but if JMU wins the turnover battle in each game, it’s going to win the game.

There’s so much talent that’s playing well on both sides of the ball, that giving the ball away is really the only way an underdog can beat JMU in Harrisonburg. That could certainly change in Frisco against NDSU, but turnovers are the key for this team.

Chase: Turnovers & Mistakes. It’s the only answer that actually makes any sense here. JMU is two wins away from Frisco, and frankly, I don’t think two of the three remaining teams on Madison’s side of the bracket have the offensive firepower to beat them. Even if they did, though, we’re talking about a team with superior athletes, outstanding coaching, schematic advantages, and home-field advantage. How does that team lose, unless it pees down the side of its leg? Even injuries, God forbid, wouldn’t necessarily take this team out of anything. The skill guys are deep; most of the defensive positions have high-quality backups, particular near the line of scrimmage. Even if Ben DiNucci himself were to get hurt, Cole Johnson has proved himself as a guy that can come in and keep JMU’s offense functional and competitive against really good teams. In my mind, you cannot design a scenario where JMU is home in January without using the word “and” in the sentence several times. It’s going to take a lot.

UNI’s coach sounded rather fearful of the Dukes in a recent soundbite. What do you make of Mike Farley’s comments?

Jack: I hope he has a different tone with his team. If that is my coach at a podium saying things like JMU is superior in every aspect, especially when they went to three overtimes with an FBS team earlier in the season, then I am upset. I really do hope in the locker he is pumping up his guys and they are bouncing off the walls getting ready for Friday night.

But if I take what he said at face value then I expect JMU to win by 50 and for Mike Farley to have the happiest post-game press conference with a huge smile on his face saying, “I’m just glad we are here.”

Bennett: I believe Farley has a much different tone with his team. The Panthers just SDSU to make it to Harrisonburg. Regardless of what the coach tells the media, UNI will come out believing it can pull the upset. Unfortunately, I’m not sure it can.

Chase: Even for a midwestern coach, I don’t buy an “aww, shucks” routine in a contact sport. Farley is using the ol’ sales tactic of Underpromise, Overdeliver. I suppose it’s not a terrible idea… as long as his team knows that.

Who wins? Give us your score prediction and reasoning.

A weird safety will happen when the game is close and give UNI life, then JMU will step on their throats and never look back. UNI’s defense will struggle and their lackluster offense will only score again because there will be a turnover on JMU’s 25, which will give them the field position. JMU dominates.

Bennett: I forget what I said on the podcast, but let’s go with JMU 38, UNI 6. I don’t expect Northern Iowa to score much in this weather.

Chase: JMU 45, Northern Iowa 6. UNI has a good defense, but I don’t trust its offense — dealing with multiple injuries and led by a redshirt freshman — to have any kind of success on Friday. To me, that means a bruising Time of Possession from JMU, and a semi-close game at half that gets absolutely busted open in the third quarter.

Fun question: What’s your favorite memory from a JMU playoff game you attended?

Jack: I’m going to go with the Weber State game. I was working the game with Athletic Communications and since the Colgate playoff loss in ‘15, I hadn’t really experienced another bad loss. But here we are, down eight with time slowly running down on this magical season in the quarterfinals, I’m thinking “man, this really wasn’t supposed to happen, this sucks.” I am running box scores for media for this game, so I’m getting ready to run the final box then the 40-yard bomb to Stapleton down the sideline to get us within two, then the crazy Trai Sharp 2-point conversion. Then Ratke hit the field goal and I run to the backroom in the press box, since cheering isn’t allowed there, and went silently bonkers as I waited for the final box scores to print. This part may sound mean, but handing the final box scores to the Weber State radio guys who 15 minutes before had been so giddy because they thought they were going to pull the upset were now so gloomy was definitely just as good as the game.

That. That was my favorite memory.

The Dukes weren’t supposed to beat the Bearkats 65-7, but they did. To me, that game was arguably the most fun of any during the national title run in 2016. It was cold, dark and perfect.

JMU jumped all over SHSU early and never let up. That game signaled that yes, JMU was a national title threat. It was a dominant home performance in front of a rowdy home crowd. It came before we all expected greatness out of JMU each week. I loved it.

Chase: This is easy for me. JMU has created a lot of wonderful playoff memories over the last four seasons, but those who are my age (late 20s) were too late for the prime Mickey years, but too early for the modern powerhouse days. My freshman year was 2009, which means I had finished WRTC and graduated before I even saw a home playoff game — a fact that I spilled quite a bit of ink on during my time as a columnist/editor with the Breeze, mind you.

Anyway, Bearkat bloodbaths and Jackrabbit pick parties were all quite fun, but I don’t think I enjoyed anything as much as I did that second-round win over New Hampshire in 2016, where the Class of 2013 finally saw a postseason win in Bridgeforth Stadium. It was a cold and windy afternoon, even by December-in-the-Valley standards, but I stayed well past the end, until the stands were empty and the players had left the field. It took eight full seasons before I ever saw JMU win a game that really mattered, and I didn’t ever want that day to end. Lock the Damn Gates, indeed.