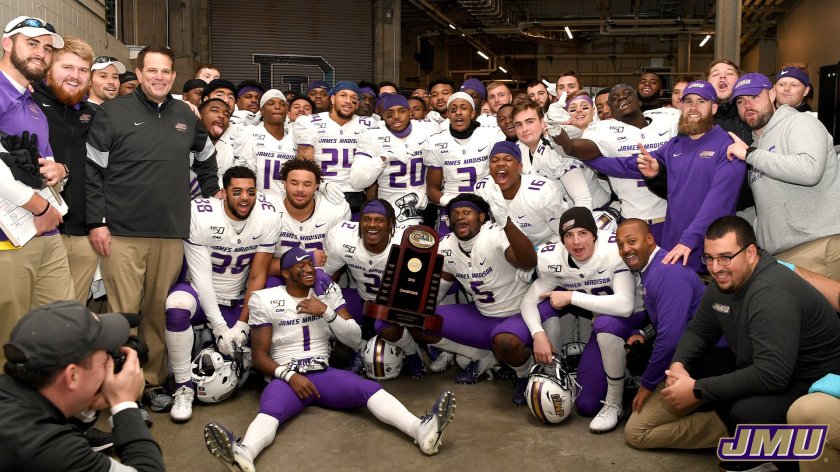 JMU and Liberty football met on Nov. 29, 2014 in the first round of the FCS playoffs. The Flames edged the Dukes, winning 26-21 in Bridgeforth Stadium in a game JMU fans will almost certainly claim they should’ve won.

Six years later, Liberty finds itself wrapping up a 10-1 season with wins over Syracuse, Virginia Tech and a ranked Coastal Carolina team. Its lone loss was a one-point defeat to N.C. State.

JMU, on the other hand, sat at home.

The Dukes — understandably — didn’t play games in the fall due to COVID-19. The FCS playoffs, and JMU’s season, have been delayed to the spring … if they happen at all this season.

Fans can debate all day whether or not JMU should be an FBS team by now, and the comparison to Liberty isn’t completely fair as the Flames are an independent and that option isn’t viable for JMU, but just a few years ago the teams were on competing at the same level on the same field.

Heck, Coastal Carolina lost in the FargoDome as an FCS team as recently as 2014.

Since 2014, JMU has developed into the 1B to North Dakota State’s 1A. The Dukes are the best FCS program not located in Fargo, competing in three of the last four national championships.

From a financial standpoint and an on-field perspective, the Dukes are the most FBS ready team at the FCS level. So our question is … how long would it take JMU to go from the FCS playoffs to the level of a Liberty or Appalachian State or even a borderline top-10 FBS team at the Group of 5 level like Coastal Carolina?

Obviously, it’s a subjective question. There’s no correct answer. But let’s see if we can’t come to a reasonable estimate to when the Dukes would become a G5 threat.

There’s a legitimate argument to be made that the Dukes could join the Sun Belt or Conference USA and contend for a league title immediately.

In the Sun Belt, Sagarin Ratings place Louisiana at No. 46, while Coastal Carolina comes in at No. 48 and Appalachian State sits at No. 50. JMU currently ranks 78th.

Sagarin actually places JMU one spot ahead of 10-1 Liberty.

Factor in the 22 additional scholarships allotted at the FBS level, and the Dukes could close the gap between teams like Louisiana rather quickly. A few standout freshmen or transfers could put the Dukes over the top immediately upon joining an FBS conference.

The AAC is clearly the top Group of 5 league, however. How would the Dukes fare in that league, which dubs itself part of the Power 6?

Half of the AAC sits ahead of JMU in the Sagarin Ratings, which sounds about right. There’s a big gap between JMU and Cincinnati, which made a case for a spot in the College Football Playoff. The Bearcats sit at No. 17.

JMU is well above No. 99 Mike Houston and East Carolina, though. 1-8 South Florida sits at No. 128, two spots behind Towson. The Dukes typically make quick work of teams in that range.

If added to the AAC, JMU would not be a bottom dweller immediately, but it also wouldn’t be ready to win a league title. The Dukes aren’t Cincinnati.

This is the most likely answer, especially when using Coastal Carolina, Liberty and Appalachian State as examples.

Applachian State joined the Sun Belt in 2014 with a rich FCS history. The Mountaineers went 7-5 in their first season, looking decent. In 2015, they went 11-2 and have won at least nine games in every season since.

Coastal Carolina went 3-9 in 2017, its first season in the Sun Belt. A pair of 5-7 seasons were followed by this year’s 11-1 season which included a No. 12 ranking and a win over a ranked BYU squad. Coastal also took down Kansas to open the season.

In the Chants’ fourth season as an FBS team, it made a splash nationally.

Liberty has shown impressive growth as an FBS independent. It 6-6 in 2018, 8-5 in 2019 and 10-1 in 2020. The schedules weren’t great, but the Flames were stellar with an Auburn transfer at QB. They scored against solid teams, beating Virginia Tech and Coastal Carolina.

JMU’s program would enter the FBS as one of the best FCS teams in the country. After a season or two at the FBS level, the Dukes should be in a position to make a splash by contending for a Group of 5 league title and potentially upsetting Power 5 teams.

It’s unlikely it would take JMU four or more seasons to become one of the better Group of 5 programs, but it’s not impossible.

ODU joined Conference USA in 2014, and it has been to just one bowl game since. The Monarchs went 1-11 in 2019. ODU was a solid CAA squad before making the jump.

JMU’s most challenging path to FBS relevancy would be a jump to the AAC, which is the top Group of 5 league. It would take the Dukes time to rise from a team capable of winning AAC games to a team capable of contending for a league title.

At the same time, a few good AAC seasons and additional scholarships would drastically improve JMU’s national relevance. Many JMU fans would gladly sign up today for a shot to join the AAC, even with the risk of becoming a middle-of-the-pack team within the league.

There’s no actual answer for how long it would take JMU to go from an FCS powerhouse to a top-25 FBS team or a champion of a Group of 5 league, but the program is perfectly positioned to make the leap and be relevant at the Group of 5 level in 1-3 seasons.

Applachian State, Coastal Carolina and Liberty all show a quick rise to G5 relevance is doable.

We can debate all day whether or not moving to the FBS is the right move for JMU (what are comment sections for if not debating realignment?) but we’ll hold off on that debate this time.

In this hypothetical, we’re just wondering how long it would take the Dukes to join a Group of 5 league and captivate fans across the country by becoming one of the best teams outside the Power 5.

My best guess? Not very long.