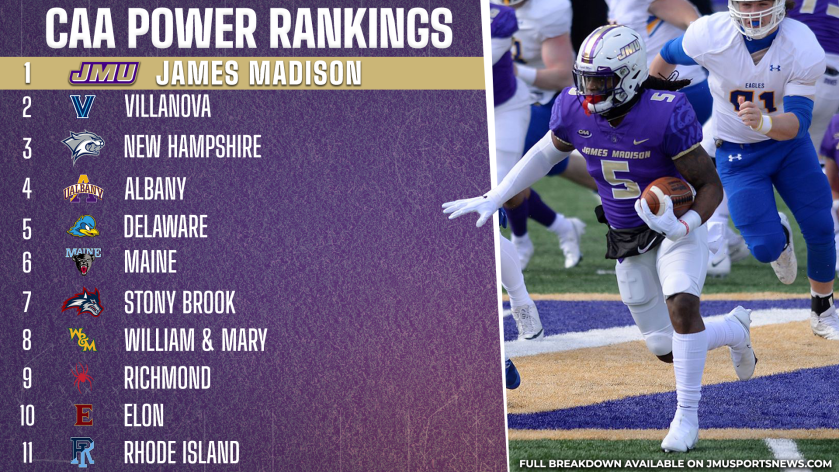 This season the CAA looks a lot different than normal. Due to the COVID-19 pandemic teams are split into the North and South divisions and there will be no Towson participating in this Spring 2021 season so that adds another wrinkle to it all.

Nonetheless, there is a 2021 Spring CAA season. It looks different, feels different and is just straight up different but we march on!

JMU came into the season ranked No. 4 in preseason polls but after beating up on a non-scholarship Morehead State out of the Pioneer League they jumped up two spots to No. 2. Elon also got their season kicked off this past Saturday against another Pioneer League team but they just barely eeked out a 2-point win over Davidson.

So, without furth ado… let’s power rank these teams! And also, as JMU fans let’s thank our lucky stars JMU is playing in the pitiful South division and not the darned good North.

JMU came into this season as the clear-cut best team in the CAA. It has the best offensive line highlighted by Liam Fornadel paired with four of the best running backs in the league with Percy Agyei-Obese, Jawon Hamilton, Latrele Palmer and Solomon Vanhorse while also boasting one of the best defensive lines in the conference as well.

JMU is loaded top to bottom and showcased their ability on Saturday when they beat down Morehead State 52-0. They are going to be No. 1 in these rankings until someone proves me otherwise.

Mark Ferrante & Co. should have this Villanova squad ready to go for this Spring season. The Wildcats are highlighted by Athlon FCS preseason All-American QB Daniel Smith and LB Forrest Rhyne. With a loaded squad, they should be a threat to take the North division.

They return their entire offensive line and lost just one starter on offense. On the defensive side of the ball, they lost two of their three linebackers and their starting SS.

Coming off a heartbreaking loss in the 2019 FCS playoffs, the Wildcats should be reloaded and ready to make a run at the playoffs yet again. In 2019 Villanova was the second-best team in the CAA last season from a pure talent standpoint and had JMU on the ropes until MJ Hampton had his iconic pick-six late in the second half that helped catapult JMU to the win and eventually the national championship.

This is a Villanova team that is just another year older with Smith at the helm and is the favorite to win the North Division, but they sure have their work cut out for them.

It seems every single year New Hampshire is fielding a solid team. Up until 2018, they had made the playoffs for something like 17 years in a row which is just unheard of. Now they have missed the playoffs the last two seasons but have started to grow back into a top-tier CAA contender. UNH boasts Athlon FCS preseason All-American Evan Horn, a senior DB that is coming off a 2019 season where he put up 70 tackles, 7 tackles for loss, 4 sacks 4 picks and two forced fumbles. He should be able to lead the New Hampshire defense to another solid season.

After taking a leave of absence ahead of the 2019 season, it appears Sean McDonnell is back as the Head Coach this season with Ricky Santos moving back into his Associate Head Coach/QB coach role. The Wildcats of New Hampshire were ranked as the No. 14 team in the Athlon preseason top-25 and will look to compete in a tough North Division.

Albany may have the ability to surprise some people up in that North Division. Led by the Undercuffler, the redshirt-sophomore looks to build on his 2019 success. Albany surely surprised the nation as they finished second in the CAA with a 6-2 conference record and a 9-5 record overall. What will be key to watch with the Great Danes is how their offense looks after losing their top two receiving options after the 2019 season. Their offense was predicated on the quick pass attack with Undercuffler delivering the ball at the exact right time. If their offense can replace that production the 18th ranked team in the preseason can definitely make some noise in the North.

The Blue Hens, or the fighting Danny Roccos, were picked 22nd in the Athlon preseason poll. After finishing 3-5 in conference play last season and 5-7 overall the Blue Hens look to rebound this Spring. Led by Redshirt-Junior QB Nolan Henderson they return a large number of starters from last season. That continuity between 2019 to 2021 will be a big factor, especially early on this season as we have seen some teams with high expectations falter because of large roster turnover.

Maine has been a solid program for the last few years. Last season they went 4-4 in conference play and 6-6 overall. They were right in the middle of the road, and I believe that is where they will be again this season.

Stony Brook will look to capture its early 2019 success where it was 4-2 through the first six games. After the first six games, the Seawolves fell apart going 1-5 down the stretch going from true CAA contender to a bottom feeder.

Tyquell Fields & Co. had something cooking to start the season, but that may have all been smoke and mirrors just beating up on non-conference teams and Rhode Island. Because of that poor end to 2019, they get the seven spot. It is a big plus that Fields is returning for his redshirt-senior season, but this team has a lot of work to do.

The Tribe are entering their second year under the leadership of Mike London and the end of last season provided a possible glimpse into the future. William & Mary went 3-1 over its last 4 games with wins over Elon, Rhode Island and Richmond. I think this team has a bright future and that very well may be in the 2021 Fall season, but I believe being in the South conference where they have to face JMU twice isn’t doing them any favors this team around.

According to Athlon Richmond is “on the cusp” for its preseason rankings. I don’t know what they see out of this team but I see a bottom feeder CAA team. They did finish last season 4-4 in the conference but finished their season with three straight losses, including a 48-6 beatdown by JMU. Richmond very well may be an okay team this season, but I can almost guarantee two JMU losses and one or two more William & Mary losses making the Spiders a bottom dweller in the CAA for yet another year.

This one is easy. An Elon team that was ranked in some preseason polls and just on the outside in others fell apart quickly in week 1 and showed its true colors.

Just days before the season opener against Pioneer League squad Davidson news broke that star QB Davis Cheek was out for the season. The Phoenix then struggled mightily against a bad Davidson squad and eeked out a win. What started as a promising year for the Phoenix and what looked like to be the only true competition for JMU in the South has quickly dissolved into another bad year just like how Alka Seltzer dissolves in water, except Alka Seltzer actually does something beneficial for you…