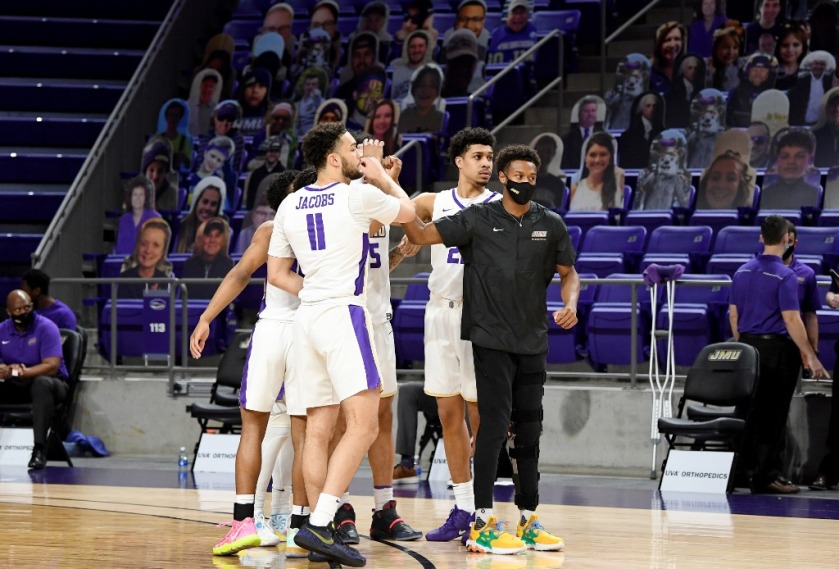 The entire team needs to step up with Lewis out. Players like Vado Morse need to take on scoring responsibility. Defensively, everyone needs to chip in. With Lewis out, the margin for error decreases significantly. JMU can’t make as many mistakes as it did with Lewis, because the league’s best player won’t be there to bail the Dukes out.

I know that’s a dumb answer, so if I have to pick one player I’ll take Jalen Hodge. The junior transfer from Louisiana-Monroe shoots 35.6% from 3-point range and 65.6% on 2-point shots. He’s efficient offensively. Hodge scored 16 points in 26 minutes against Drexel, the first game without Lewis.

Add in the fact that Hodge is an above-average defender, and he’s the pick.

Christmas is one of the most highly touted recruits to come to Harrisonburg in a long time. Last season he balled out but hardly had any minutes. This season he has had a considerable jump in minutes at 15.8 but just has lacked some consistency in scoring. He has shown that he has the capability to be a very good, if not great, player in the CAA, and now with Lewis out he needs to become the second or third option for this offense and he needs to trust his shot.

During the Hofstra series, he filled his role perfectly and nailed key baskets down the stretch to ensure the Dukes win. He scored 28 points across 47 minutes and shot 11-20 during those two games and he looked like he was poised to make that jump to become a key contributor. Then against Drexel in the season finale and the first game without Lewis he took just two shots and scored two points across 22 minutes. You would think with Lewis out some of those shots would fall to Christmas but it was just the opposite. He has been finding his niche in the rebounding column, but he needs to become the Hofstra series Christmas and take his opportunities when they are there because I can almost guarantee he had more than two shooting opportunities against Drexel.

B: To state the obvious, JMU won the CAA regular-season title. After finishing last in the league a year ago, that’s clearly a success. Regardless of what happens in the conference tournament, it’s a successful season.

From a more macro view, JMU improved as the weeks went on. It’s sad how few JMU men’s basketball teams in recent memory failed to improve from November to March. This team clearly improved over the months of the season.

Perhaps most importantly, the young players made impacts. I expected grad transfer Rashawn Fredericks to play a massive role for the Dukes. He didn’t play a minute. Joel Mensah, an SDSU transfer, battled injuries and made a minimal impact in the post.

With those two additions adding little on-court production, the freshmen were fantastic to pick up the slack. JMU has a handful of young guys who could develop into All-CAA players by the time they become seniors.

The season is a success because JMU is heading in the right direction. That’s all JMU needed to show this season, and it surpassed expectations in doing so.

J: Bennett nailed this one on the head. Mark Byington was hired in a pandemic, he assembled this team during a pandemic and he prepared them for a season mid pandemic. OH! And they have played a season IN A PANDEMIC. And they got better each week and won the CAA regular-season title. How much more can you expect?

Coming into this season Bennett and I said on the podcast that just showing growth and bringing some excitement to the program would be a successful season and I would go out on the limb and say Byington has done that and so much more.

This team started the season 2-4 against Division I opponents and it seemed like the only hope for them would to just show that there was potential. Then they won a CAA game, then another, and another and another. Soon enough this team had rattled off seven in a row and secured the one seed in the CAA Tournament.

Everything about this season was a success and whatever happens, or doesn’t happen, in the CAA Tournament is the cherry on top.

With all that being said, I would really love for them to make it out of the quarterfinals for the first time since 2014.

B: I think so. Home teams won about 60% of CAA games this season, so statistically speaking the Dukes seem to hold an advantage over every other team in the tournament entering the weekend.

It also helps considering Lewis’ absence. Without their star, the Dukes at least can lean on familiarity in the arena. They’ll likely spend some time in their own apartments or dorms instead of spending a week in a new town. It’s comforting to use the same facility, and for a team likely a bit uncomfortable following the Lewis injury, that helps.

JMU still needs to execute well to win, but playing at home offers the squad a boost.

J: Yes, playing at their home arena will be a major boost. JMU this season has played 13 games at home, going 10-3 in those games and just six on the road. Playing on the road is unfamiliar to the Dukes this season which makes the fact they get to play at home huge!

There still won’t be the normal fan atmosphere so that won’t play in a role but just the fact this is where they have played 68 percent of their games and 100 percent of their practices is a major plus.

B: The road to the CAA title is challenging. There’s a potential date in the quarterfinals with a physical Towson team. Depending on how the game is called by officials, it could be a bruising affair.

After that, JMU may face a Hofstra team in the semifinals that it beat in two thrilling games in recent weeks. Could the Dukes beat that same competitive foe three times in one season? I have my doubts.

If JMU somehow gets through all of that, the Dukes may face Northeastern. There’s a case to be made that even with Matt Lewis available for the Dukes, Northeastern is the best team in the league.

My mind says JMU falls in the semifinals. My heart says they win the league title. I’ll follow my heart. JMU cuts down the nets and goes dancing.

J: Call me foolish all you want but in a low major like the CAA there is one thing that is the most important in picking conference tournament winners and that is who has the best coach and I am willing to say that honor goes to Mark Byington.

This may sound odd, but if Matt Lewis was going to go down with a season-ending injury he went down at the right time. They were able to go out and play in a seemingly meaningless game with the one seed wrapped up and could essentially get a dress rehearsal for how this thing will go without the presumptive CAA Player of the Year. That dress rehearsal will be huge as they head to the opening night of the Dukes’ postseason.

I fully believe that Byington will have watched the film and has been working on all of the deficiencies of this team the past week and will have them ready for this tournament. Add on to that JMU has two deadly guards that can shoot the lights out in Morse and Hodge and, barring any injury setback, will have Wooden at their disposal.

JMU will have its hands full, no doubt. You can easily argue as the one seed they have the tougher draw, but this is march and this is college basketball.

Give me the Dukes to go dancing.