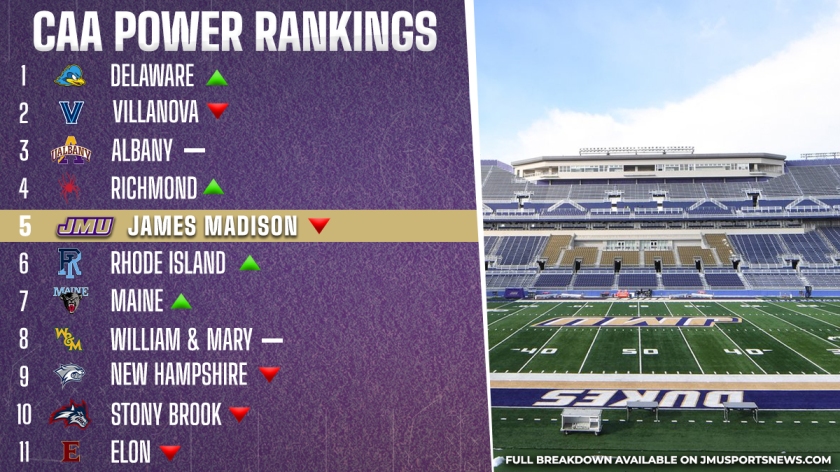 The CAA just had an absolutely crazy Saturday of action. I am going to try and make sense of it all…

Delaware handled itself against the Seawolves. That one was easy.

Richmond beat Elon by 24 this week and just last week Elon took an 11 point lead into the 4th quarter against the No. 1 team in the nation at the time.

Rhode Island the perennial dirty welcome mat to the CAA took the No. 6 team in the nation to OT on the road and won. On the road! Villanova was coming off a close 16-13 win over Stony Brook in week one, so is Villanova overhyped?

And William & Mary at JMU was postponed and I have a feeling that game would have just added to the craziness of it all.

After typing all of that

The only certain thing this week is that Delaware and the Fighting Danny Roccos Blue Hens are the clear-cut best team in the CAA as of this second. The Blue Hens dominated Maine in the first week and just beat down the Seawolves. Delaware is the only team to have two dominating wins this season in the CAA.

This one is simple. They proved themselves again and have pulled away from the rest of the CAA. They didn’t allow a point in Week 1 and had every facet of the game working. In Week 2 they allowed three points and put up 30+ again.

I feel dirty putting Villanova at number 2, I just can’t put another team here. Depending on the outcome next week, Villanova may be in for a free fall in the rankings though.

We may have been oversold on the Wildcats this season. Coming in they had two preseason All-Americans and were a top 10 team. They had National Championship aspirations and after two weeks I am severely underwhelmed. A squeaker of a win over Stony Brook in Week 1 who then got blown out in Week 2, and then a loss to Rhode Island at home. Daniel Smith balled out in the first game, going 16-31 for 242 yards and a TD, but vs. Stony Brook, he went 12-27 for just 116 yards and an INT.

The Wildcats secure the number two spot this week still on their promise of being good, but one more eek out of a win, or even a loss, not only will their postseason hopes be dead more importantly their ranking in the JMU Sports News Power Rankings will plummet.

Remember last week when I said I may be “foolishly high” on the Great Danes, well I still might be and that may really come back to bite me in the next week or two.

Another team that I am riding with their promise and chalking up this week’s game as an aberration rather than a sign of what is to come. The Great Danes traveled to Maine for week two, their second straight road game, and the defense failed to show up. The offense hung 34 points on Maine which should be enough to win and Jeff Undercuffler even led Albany down the field in the final minutes to give them a lead.

The defense however allowed Maine to just shred through them like paper in a paper shredder and score the game-winning touchdown. Honestly, it was ugly to watch. Albany was up 27-24 with just about 10 minutes to go in the game and the defense allowed Maine to drive down and torch them twice!

Albany hosts Rhode Island for its first home game of the 2021 Spring Season, and that game will tell us a lot about the state of both programs.

Okay, have we gathered ourselves JMU fans? Yes, Richmond is ranked above JMU this week for one very important reason. Head-to-head against similar opponents.

Richmond vs. Elon: The Spiders won 38-14 scoring 10+ points in three of four quarters en route to a dominating win.

JMU vs. Elon: The Dukes won 20-17 and JMU trailed by 11 going into the 4th quarter and needed the backup QB to play near perfectly to have a chance.

Richmond came into this season with some expectations, receiving votes in the STATS FCS Poll, and has slowly gained steam after the first two weeks. Behind redshirt-senior Joe Mancuso, the Spiders are a top 4 offense and a top 5 passing offense averaging 29.5 points per game. On the other side of the ball, the defense has been playing solid football allowing just 14 points per game and coming up in big moments, like the end of the William & Mary game.

Do I think JMU would win in a game? Yes, probably. But as of this second Richmond gets the edge.

Look, the last taste I have of this team was the ugly Elon win. And the ugly Robert Morris win. It is like drinking an overly hoppy IPA that tastes like grass dirt. It hits you hard and you want to spit it out but you swallow it down and don’t enjoy it.

That was JMU the first two weeks and that is the last memory I have of them. I would never order that IPA again. Instead, I want a nice Hazy NEIPA or maybe a nice Sour to get the taste out of my mouth. The problem is the bar was closed this weekend and I couldn’t order that so here are the Dukes at number 5.

Gage Moloney is the starter and got an extra week of prep after the game against William & Mary was postponed due to COVID-19 problems within the JMU Program.

JMU missed out on the weekend of topsy-turvy crazy CAA action and that probably benefitted the Dukes. Liam Fornadel is out for the rest of the Spring and that is a blow to the offensive line but now with an extra week whoever is replacing Fornadel has a chance to get fully ready.

JMU has underwhelmed this season, squeaking out a win against Robert Morris then nearly dropping its opening conference game. A lot of things have to come together for them to have a chance at making any sort of postseason run.

The biggest advantage in the Dukes’ favor isn’t anyone on the roster, it is the fact it plays in the CAA South.

Rhode Island didn’t play in Week 1 and got its conference play started on the road against Villanova. You know just a casual game to start the season against what was thought of as a national title contender on their home turf. Easy for a perennial bottom-dweller in the CAA.

Is this game the sign that they figured it out?

I’ll wait until they can string a few more wins together to anoint them anything, but man that win was impressive. I mean, Rhode Island looked like a good, well-rounded team. They scored 40, they were composed late and redshirt-junior QB Kasim Hill, a transfer from Maryland by way of St. John’s College in Tennessee, stepped in and was throwing darts. He went 18-28 for 246 yards and added a TD with his legs.

Remember that one weird 2018 year where Rhode Island looked competitive and went 4-4 in CAA play? With Hill at the QB this season they may outperform that season.

Is Maine good? I mean, they beat Albany but Albany is teetering. The Maine defense allowed 34 points but made stops when needed and the Black Bears did win. I just can’t get that week 1 taste out of my mouth right now. Maine at home is a different team than Maine on the road. If they can recreate this win next week on Long Island vs. Stony Brook then Maine may be a solid CAA North team. Right now, I think they just got lucky.

William & Mary played Richmond tough and had a fourth-quarter lead against the Spiders. The Tribe were out of action this week and they couldn’t keep that momentum going. I have been high on Mike London’s squad this season and I think they would’ve played JMU well but since that didn’t happen here they are.

UNH was out of action this week and suffered since the team they lost to ended up losing to Maine. Because of that, I struggle to put UNH higher than Maine. I mean UNH scored 20 (with 7 of those coming thanks to a special teams’ TD) against the Albany defense who just allowed 38 to Maine. UNH may be in for a long season.

Okay, the end to 2019 might not have been a mistake and may have been what the Seawolves are. The beginning of their 2019 season was the outlier.

This team isn’t that great. They are one of the worst offenses in the league and have scored just two TDs this season and have allowed 23.5 points per game. Tyquell Fields & Co. have a lot of work to do before they are considered a solid CAA contender. As of right now, they are in free fall and the only thing to break their fall is the next team.

Ah yes, Elon. The Phoneix has not risen from the ashes and has instead burned up and created even more ashes.

They are bad. There was hope after giving JMU and the No. 1 team in the country (shouldn’t have been) a run for its money. Then hosting Richmond, Elon proceeded to get blown out.

Good luck this season Elon. A three-game losing streak isn’t easy to bounce back from.