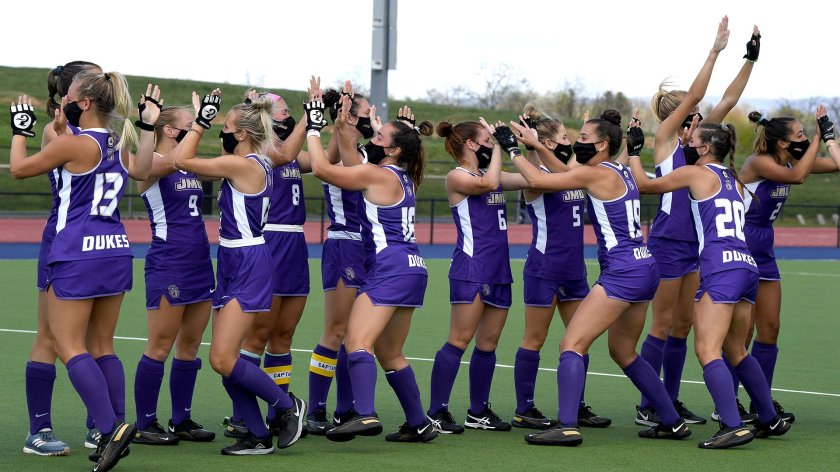 JMU sports are almost back.

We didn’t have to wait long for their return, thanks to JMU softball’s magical run in the Women’s College World Series.

As we say most years, this year has a chance to be special for JMU’s athletic programs.

Football should contend for a national title. Field hockey could return to the NCAA Tournament for the first time since 2008. Volleyball, men’s soccer and women’s golf are poised to win CAA titles.

This year could be spectacular given the possibilities for the men’s and women’s basketball teams. The special year begins with an stellar group of fall sports teams.

Overview: I expect the Dukes to compete for a national title.

JMU’s offense is strong, as Cole Johnson returns for a final season at quarterback. He’s joined by Percy Agyei-Obese, arguably the best running back at the FCS level.

Wide receiver Antwane Wells Jr. is just a redshirt freshman, but he’s one of the best receivers at the FCS level. The offensive line is solid, especially with Liam Fornadel healthy after missing the spring slate.

Defensively, JMU is stacked. Defensive tackle Mike Greene enters the season as the CAA’s best defender, and he’s a legitimate NFL prospect. He highlights a deep position group. The team boasts experience at linebacker and in the secondary.

Special teams remains a bit of a question, at least in the return game. There’s reason for optimism, though, as JMU holds the athleticism to improve in that phase.

Realistic expectations: Winning a CAA title and making a deep playoff run that could end with a national title. An undefeated season is possible with no FBS foes on the schedule.

Overview: JMU put five players on the All-CAA first and second teams in the spring. All five of those Dukes, including reigning CAA Player of the Year Eveline Zwager, return for the fall season.

After going 6-2 and 5-0 in the CAA in the spring, it’s easy to be excited about the Dukes. They haven’t won the CAA Tournament since 2008, but it’s not outlandish to expect this proud program to be at the top of the conference this fall. The program, which won the national title in 1994, seems close to making the NCAA Tournament.

The schedule features plenty of winnable games, but also matchups with Power Five schools like Duke and Louisville.

Realistic expectations: Finishing the season with a winning record and making a run at a CAA title.

Overview: The Dukes went 7-3 overall in the spring, winning six of their seven CAA matches. JMU sports a streak of seven consecutive winning seasons, and there’s little reason to expect different under Lauren Steinbrecher this fall.

All three of JMU’s All-CAA players from the spring return, and the Dukes have a nice blend of experience and youth on the roster. The recruiting class looks impressive, and Steinbrecher seems thrilled with the new additions. There’s plenty of talent to be near the top of the CAA standings yet again.

There’s experience across the roster, but there’s also room for underclassmen to rise up the ranks with impressive showings.

Realistic expectations: Finishing in the top three in the CAA

Overview: JMU went 1-3-2 in the spring, not quite what the Dukes want. They’re coming into the season with minimal expectations, as they’re predicted to finish fifth in the 10-team league this fall.

Hofstra is the heavy favorite to win the CAA.

JMU did land two players, Ginger Deel and Ebony Wiseman, on the 2021 preseason All-CAA team. Deel scored a couple goals in the spring season. The Dukes’ success may depend on the development of underclassmen.

Realistic expectations: Finishing in the top half of the CAA

JMU opens the season on Aug. 26 when it hosts Marshall, the defending national champion. That’s an opportunity to open the season with a statement.

The Dukes return a ton of experience, including forward Luca Erhardt, who scored a team-leading three goals in the spring. Replacing goalkeeper TJ Bush will be a massive challenge, but the team has veterans at the position.

Realistic expectations: Competing for the CAA championship and an NCAA Tournament appearance

Overview: The team’s top three players from a season ago return this fall. JMU finished third out of eight CAA teams in the CAA Championships in the spring, and there’s reason to believe the Dukes could be competitive yet again.

Keep an eye on redshirt junior George Heath. He’s an experienced player and performed well a season ago. He’ll likely be one of the team’s best this fall.

Realistic expectations: Finishing in the top three of the CAA

Overview: We’re super high on this program. The Dukes won the CAA title in the spring, and they return each of their top five players from last season. It’s hard to imagine this team falling off dramatically, even if a few players happen to struggle.

If the Dukes improve upon last season, they could be a scary group for years to come. We’re excited about the potential of this squad. Keep an eye on Kendall Turner and Amelia Williams. The two sophomores have bright futures in the sport.

JMU should contend for a CAA title in women’s golf, men’s soccer, volleyball, field hockey and football. The Dukes are loaded across the board, and men’s soccer and football should be nationally ranked for much of the season.

Women’s golf should be considered a sleeper to contend in an NCAA Regional in the next few seasons, given the talented underclassmen on the squad. It’s an exciting time to be a JMU sports fan, and the Dukes should be near the top of the CAA in just about every fall sport.