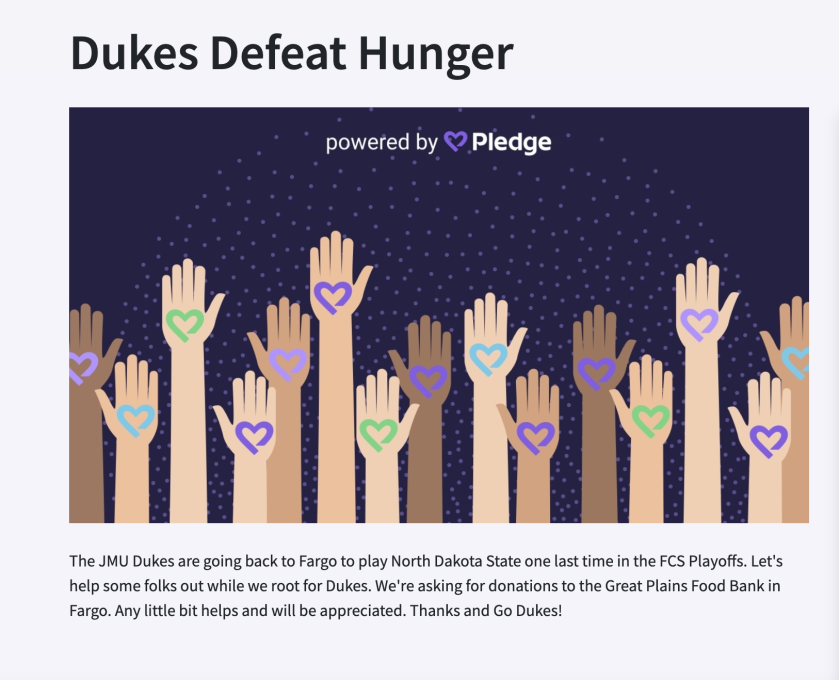 I love when JMU wins. I’m an alumnus, and I follow the athletic programs religiously. Hell, I even made a website about JMU sports!

Friday night, however, I’m not all that focused on the result.

Don’t get me wrong, I want JMU football to beat North Dakota State. I want to see the Dukes walk into the Fargodome and leave with a ticket to the national championship in a few weeks.

At the same time, this week already feels like a victory.

It’s really hard to get amped for CAA games, given the current state of JMU’s athletic program. The Dukes are 40-3 in conference action since the start of the 2016 season, dominating the league. During that same span, JMU is 1-2 against North Dakota State.

Simply put, the Dukes might actually lose this week. In fact, most sportsbooks list them as about a 5-point underdog on the road against the Bison.

Oddly enough, that makes me happy. I enjoy when games are in the balance, and the Dukes actually need to play well to win. I’d argue that JMU didn’t look all that impressive against New Hampshire, Richmond or Delaware, but the Dukes won those games by an average of 10 points.

This week, red-zone field goals and missed scoring chances will likely lead to a defeat. It’s fun when JMU’s execution has consequences.

On the flip side, it’s significantly more fun when the Dukes win games against competitive teams. The 2016 win against NDSU is one of the team’s most memorable triumphs in recent memory. The chance to beat good teams in competitive games is a reason why the Dukes are heading to the FBS after this season.

North Dakota State fans exist, and they care. I’m not sure the same can be said for programs like Maine, Towson, or even Richmond. If they do, they’re certainly less vocal online and in their respective stadiums.

Playing against a team with fans who care makes the game-week experience drastically better. I’ve thoroughly enjoyed the online banter between fanbases this week.

JMU and NDSU fans have also decided to give back this week through a pair of charitable campaigns. The guys at JMU Sports Blog decided to run a campaign, like they did in the spring, to donate money to a food bank that represents the region of JMU’s opposing team. As of Wednesday evening, the campaign has raised over $4,000.

On the North Dakota State side, Matthew Fraase decided to run a charity contest this week. He wanted to raise $500 for the Central Cass TreeHouse Organization, a nonprofit in North Dakota that provides clothing, hygiene items, and food to students at Central Cass, a school system in Casselton, North Dakota.

Tremendous work by all involved.

I absolutely want JMU to win Friday night, but this game week has offered more smiles, laughs, and pleasant interactions than any other week all season, and 48 hours still remain until kickoff. From a fan’s perspective, I can’t ask for much more.