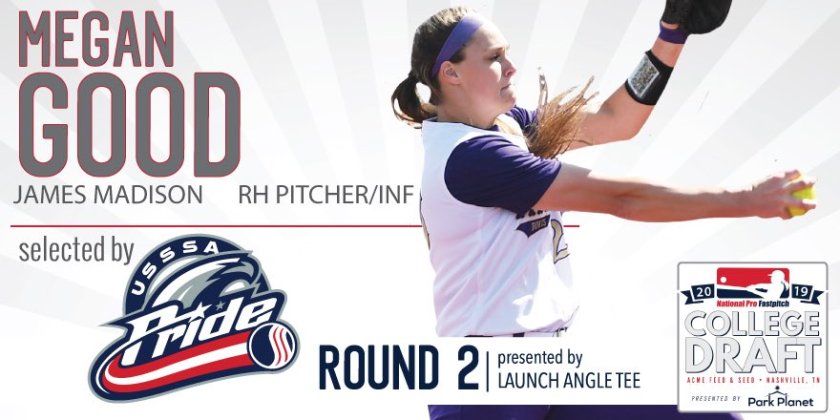 Just after 8:30 p.m. Monday in Harrisonburg, the USSSA Pride announced they selected JMU softball’s Megan Good with the 10th overall pick of the National Pro Fastpitch Draft. While the Dukes’ star pitcher didn’t even know about the selection until her teammates told her, a former JMU standout was celebrating the news at 9:30 a.m. Tuesday in Japan. Jailyn Ford, who played with Good during Good’s freshman and sophomore seasons, is a member of the USSSA Pride but is currently playing in Japan during the Pride’s offseason. She made sure to carve out a block of time despite the time difference to watch the draft live to see who the Pride added and where Good would land.

“Thrill and enjoyment,” Ford said of her reaction. “I was just happy for her and happy for the team. I did a little fist pump, maybe yelled a little bit, too, to know that we were gonna be on the same team and we weren’t gonna have to compete against her.”

Ford briefly reached out to Good via text to send congratulations, but didn’t add too much more as she didn’t want to distract Good during JMU’s season. Even though Ford is busy managing a professional schedule, she still does her best to follow the Dukes’ progress. She traveled to Florida for the team’s early season matchups with teams like Oregon and Tennessee and liked what she saw from both Good and the entire team.

After falling one at-bat short of making the first Women’s College World Series in program history during her senior season, Ford believes the Dukes are close to finally getting over that hump in 2019.

“I think this year’s the year they get to that World Series and really make some noise,” Ford said. “I’m excited for them, and I’ll be following along throughout the rest of their season as well as postseason.”

As Ford watches the Dukes, she’ll be watching Good break a handful of JMU records that she once held. In fact, Good and Ford are currently tied with 815 career strikeouts heading into today’s doubleheader with Duke. Barring something unexpected, Good will surpass Ford’s record, which the former Duke has absolutely no problem with.

“I know by the end of the season she’s going to break every record, shatter them all,” Ford said. “And just set a new standard for what JMU softball expects. I think she’ll hold some of those records for a really long time. She’s a great player, she deserves all that success. She’s been fun to play with, but she’s also been fun to watch.”

Upon seeing the announcement that Good would join her team, Ford said there was a sense of relief knowing she wouldn’t have to compete against the player she saw every day in practice for the final two years of her collegiate career.

“I knew after watching her play this spring and the movement on her ball and just the location of everything, that teams would struggle with her,” Ford said. “I’m just glad we don’t have to be one of those teams.”

As for Good’s prospects of earning playing time on what Ford describes as a roster filled with “a lot of good players,” there are no guarantees, but the redshirt senior’s versatility make her an ideal candidate to earn a major role.

“Her opportunities are endless to find a spot in that starting lineup,” Ford said.

Good offers the ability to pitch, play first base and hit. The Fort Defiance native has a career .362 batting average and 41 home runs to go with her career ERA of 0.97 across 763 2/3 innings pitched. She’s also removed doubts about her health following her season-ending knee injury last season. Good sports a 1.65 ERA against quality opposition this season and has added 12 homers and 44 RBIs across 38 games in 2019.

Ford has seen Good’s dominance as both a hitter and a pitcher from the field and from the stands. She’s watched as Good developed into her potential under former head coach Mickey Dean and has continued watching as Good battled back from a knee injury to return to dominance this year. In a short few months, Ford will get to see Good’s greatness from the field yet again.