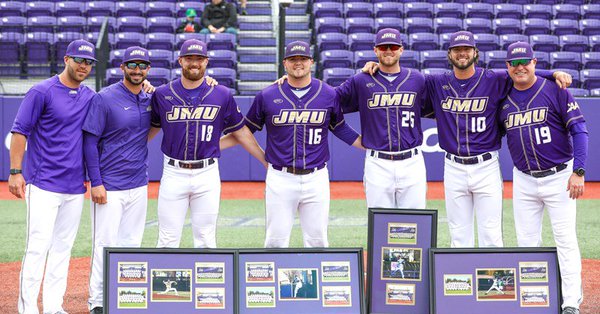 Talk about a turnaround – JMU sat at 2-8 in the CAA. Eight games later, the Dukes are 9-9 in the conference. A few easier opponents and some timely hitting have put the Dukes (28-19, 9-9 CAA) in great position to qualify for the CAA Tournament.

Game 1 – JMU won 5-2. Kevin Kelly was dealing. He struck out 13 batters across six innings. In relief, Nick Robertson struck out seven batters through three innings. It was an impressive game for JMU, which scored three runs in the eighth to break open a 2-2 game.

Game 2 – JMU won 1-0. The Dukes only got three hits, but one of those hits was Brady Harju’s solo homer in the bottom of the seventh. Nick Stewart and Sheldon Perkins teamed up to throw the shutout.

Game 3 – JMU won 6-5 in 10 innings. The Dukes led 5-1 after two innings before letting Towson fight its way back into the game. A Matt Dipasupil single in the 10th ended things.

CAA standings – JMU is in a great spot after starting the CAA slate poorly.

Up next – JMU plays at George Mason on Tuesday before a weekend road series with Northeastern.