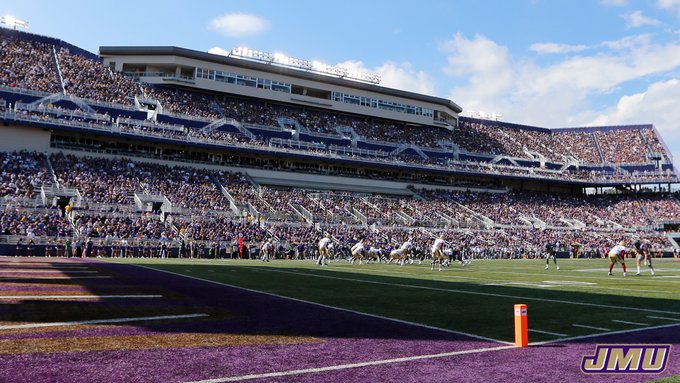 New head coach Rusty Wright takes over a talented Chattanooga roster. The Mocs return 17 starters and enter the season at No. 19 in the HERO Sports preseason poll.

Chattanooga’s defense was one of the better units in the country last season, and the Mocs added three FBS linebacker transfers in the offseason. There’s reason to expect another strong showing on defense. Offensively, the Mocs struggled in 2018, but they return all five starting offensive linemen. They also return last year’s starting quarterback in Nick Tiano.

In a way, this game feels like the first game of the season. The season opener against West Virginia is winnable, but there’s no obvious downside to the Dukes losing that game. The FCS Selection Committee won’t hold an FBS loss against the Dukes, and all of the team’s goals will still lie ahead if they lose to WVU. The next two weeks feature matchups against Saint Francis and Morgan State. JMU should win those easily.

The Chattanooga game feels different. The Mocs are a top-25 caliber FCS team, and this game starts a three-game gauntlet with Chattanooga, Elon and Stony Brook. This game brings excitement and intrigue because it signals the beginning of challenging FCS games.

The Spiders were picked to finish 10th in the CAA this season, and they’re coming off a 4-7 season. It’s hard to expect much out of Richmond this year, but the Spiders have a few solid pieces.

Quarterback Joe Mancuso has some starting experience and can make plays with his legs. The Spiders have a few interesting playmakers on the outside, and they have a solid group on defense. Senior defensive lineman Maurice Jackson is a stud and earned CAA Preseason Defensive Player of the Year honors. For a unit picked to finish 10th in the CAA, Richmond’s roster isn’t awful.

There’s a different energy for this in-state rivalry, regardless of each team’s record. Imagine a top-5 JMU team playing its home regular season finale against a scrappy Richmond squad looking to make a late push for a playoff berth. There’s a chance for storylines in this game, and Bridgeforth should be packed for the in-state showdown.

The Tigers are led by CAA Preseason Offensive Player of the Year Tom Flacco, and they can score with the best of them. Rob Ambrose talked at CAA Media Day about preparing his team for a deep postseason run this season after their offense faltered in bad weather in the opening round of the playoffs. Towson wants to make a run at not only the CAA title, but also a national title.

That might be optimistic, but the Tigers are really good. If they get more consistent play on defense and perform up to expectations on offense, there’s no reason Towson can’t be a top-10 team when they roll into Harrisonburg on Oct. 26.

Towson wants the CAA title, and it lost to JMU 38-17 late last season. Expect an angry Towson team to circle this game on the schedule. It should be a fun battle, and both teams should have elite offenses. There’s a chance for a back and forth affair with the winner scoring 30+.

This game is also JMU’s Homecoming. With alumni back in town, this game should put close to 25,000 people in the seats. The atmosphere should be electric for an October matchup between the CAA’s best.

Every game against an FBS team means a little more. Every FCS player wants to prove they belong in the discussion with FBS schools, especially those at the Power 5 level. On Aug. 31, JMU gets its chance.

What makes this game interesting is West Virginia’s situation. The Mountaineers are breaking in a new coach and quarterback. Most experts think West Virginia will struggle to make a bowl game this season, while JMU is expected to contend for an FCS title. The Dukes are in prime position to pull the upset.

If JMU beats West Virginia, it puts the Dukes in the national conversation for at least a day, and the buzz surrounding the 2019 season will intensify. Fans would start the JMU hype train before the calendar even hits September. Curt Cignetti would start his tenure with a win over his alma mater, and JMU would be 1-0 with a special season on the horizon. The Dukes don’t have much to lose, but they have quite a bit to gain. This is going to be fun.

This game also comes at a critical time in JMU’s season. The Dukes will have already faced West Virginia and Chattanooga and could easily have one loss on their record. A loss to Elon could give the Dukes two losses before October. A win could set the Dukes up for a postseason bye and a run at a CAA title. There’s a lot at stake.

Assuming both teams start the season well — with maybe an FBS loss apiece — this game is critical. The loser will be playing catch up in the CAA title race.

Editor’s Note: Which game are you most looking forward to this season? Share your thoughts in the comment section.