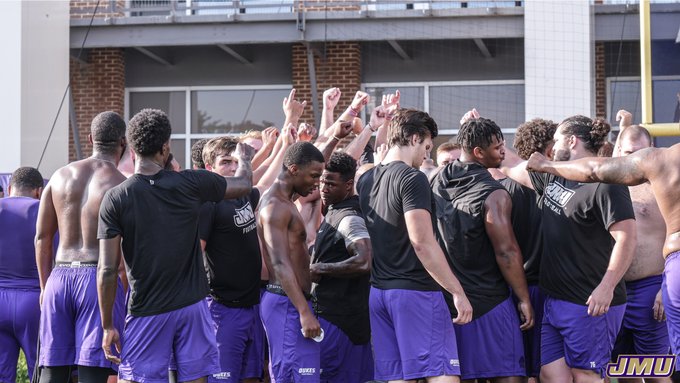 With roughly a month until the season opener, the Dukes are close to hitting the practice fields to prep for West Virginia. When JMU’s players do put the pads on and start preparing for the season, there are a few key position groups and players to watch.

The Dukes enter the season as one of the most highly regarded teams in the country, but that doesn’t mean every position battle is clear or that the team doesn’t have questions heading into Week 1.

JMU fans should pay close attention to which defensive linemen stand out during camp. John Daka and Ron’Dell Carter are seemingly obvious defensive end starters on paper, but Carter is versatile and should see time at defensive tackle as well. Isaac Ukwu, who is built similarly to Daka, should serve as one of the top reserve defensive ends. That position looks solid with those three guys entrenched as quality options expected to receive significant snaps.

The defensive tackle spot isn’t as clear. Mike Greene and Adeeb Atariwa look like clear starters, but what happens after those two players? JMU needs a third defensive tackle to step up and play meaningful snaps. Keep an eye on redshirt sophomores Semaj Sorhaindo and Garrett Groulx. Both possess good size and experience practicing at the collegiate level. A dark-horse candidate is true freshman Jalen Greene. He’s going to be a stud at some point, but will he be ready to play against teams like West Virginia, Chattanooga and Elon this early in his JMU career?

The Dukes don’t have the biggest defensive front, but the speed and athleticism along the line should strike fear into offensive linemen. I’m interested to see if the Dukes roll out a few different pass-rushing combinations like they did under Bob Trott. Could JMU put Carter on the inside with someone like Jalen Greene and send Daka and Ukwu off the outside? That package could excel in third-and-long situations.

I know, I know, starting this article by talking about depth in the trenches isn’t exactly thrilling, but if the Dukes want to end the season with confetti (but absolutely, positively NO streamers) flying in Frisco, they need good line play.

JMU possesses a ton of talent along the offensive line. Liam Fornadel is one of the best linemen in the country along the right side of the line, and Mac Patrick is a reliable center with significant starting experience. Between those two guys, Jahee Jackson, Zaire Bethea and Raymond Gillespie, the Dukes boast a strong group of returning offensive linemen.

The depth at the position makes Curt Cignetti’s job easier but also more challenging at the same time. It’s never bad to have a surplus of good offensive linemen, but there will be second-string players deserving of starting spots. Nick Kidwell, Truvell Wilson and J.T. Timming are a few names to watch. That’s a talented trifecta that could allow Cignetti and company to be creative with different offensive line packages. Look for the Dukes to play around with different groupings throughout camp.

Every receiver on JMU’s roster could play within the team’s offense and post a solid season. The talent is unbelievable. Unfortunately for a few guys, it’s unlikely that they’ll earn major playing time. JMU isn’t going to roll out 10 different receivers in a close conference game. The coaches will want a solid group of 4-6 guys who see the majority of the snaps.

With Riley Stapleton suspended for the first three games of the season, the Dukes need a pure No. 1 receiver to step up in his absence. Keep an eye on Kyndel Dean, Jake Brown, David Patterson and Daniel Adu as options to earn reps on the outside without Stapleton on the field. Patterson made a few strong plays in the spring and is a dark-horse to earn more reps.

Guys like Ezrah Archie, Brandon Polk and Josh Sims are proven assets from the slot position. When Stapleton returns to the field, Brown may see a few reps from the slot as well. The slot is solid, but one or two guys could post a solid camp and surge up the depth chart.

This position battle might be the most exciting to monitor during camp, as the coaches will want to see a few guys separate from the rest of the pack. Brandon Polk is particularly fascinating, as fans don’t really know what the Dukes have with the Penn State transfer. There’s potential there for Polk to gel with JMU’s quarterbacks and earn All-CAA honors. Will he find a rhythm with JMU’s QBs during camp?

It wouldn’t be an offseason article about JMU football without mentioning the quarterback battle. Ben DiNucci, Cole Johnson and Gage Moloney all have eyes on the starting gig.

I’d be a little surprised to see anyone other than DiNucci earn the job, but I also predicted Connor Mitch to win the starting position over Bryan Schor and Johnson to win the position last season. I’m not the best prognosticator when it comes to QB battles.

I believe DiNucci wins the job because he was a Third Team All-CAA player last season, he can make plays running and he holds the most starting experience by a mile. Turnovers hold the Pitt transfer back, but if he limits those it’s his job to lose.

I’m most interested in the Johnson-Moloney battle. Those two will likely duke it out next season for the 2020 starting job. Will either player earn an early edge on that job during this camp? Moloney has been billed as the future of JMU football, but ignoring Johnson’s arm talent and overall experience in the program would be a mistake.

DiNucci runs frequently and isn’t an overpowering physical presence, so it’s important the Dukes have a backup in place should DiNucci miss any time. Both Johnson and Moloney are capable backups, but it’ll be interesting to see if either guy pulls ahead of the other in the next month.

Listed as a safety on the roster, Davis spent time at linebacker and corner last season. The Ohio State transfer is athletic enough to line up anywhere (except maybe defensive line) and make plays.

One thing is for sure: JMU’s defense is better with Wayne Davis on the field. It’s not a matter of whether Davis will see the field, but rather in what role the Dukes want to use him. He could serve as a safety, but that might mean bumping Adam Smith or D’Angelo Amos off the field. He could serve as the No. 2 corner, but that could reduce the playing time for Charles Tutt. Davis could even line up in a linebacker position alongside Dimitri Holloway or Landan Word or both. Davis can blitz or cover a running back out of the backfield from the linebacker spot.

Davis can do it all, but the Dukes need to decide how, when and where they’re going to use him. He’ll likely roam around during camp and practice with a few different position groups at times. Davis holds the athleticism and skills to be one of the most disruptive players on the defense. Keep an eye on how he progresses during the next month.

Jalen Greene, Latrele Palmer and Julio Ayamel all come to JMU from the same Maryland high school, and the three Dukes might be three of the best freshmen in the entire FCS.

Greene plays defensive line and should compete for playing time immediately. He’s an athletic freak with legit NFL potential in a few years.

Palmer plays running back and stands a very good chance of earning time as the Dukes’ power back — he’s 31 lbs heavier than every other back on the roster. Some running backs choose to run past defenders. Others decide to use quickness to juke around them. In high school, Palmer put his head down and put unsuspecting linebackers on their backsides. He’s physical and has good speed through the hole. He’s a coach’s short-yardage dream.

Ayamel is an athletic linebacker who will at least get the chance to compete for time on special teams. Like his high school teammates, Ayamel possesses the size and speed needed to excel at the college level.

Editor’s note: What are you watching during JMU’s fall camp? Share your thoughts in the comment section below.