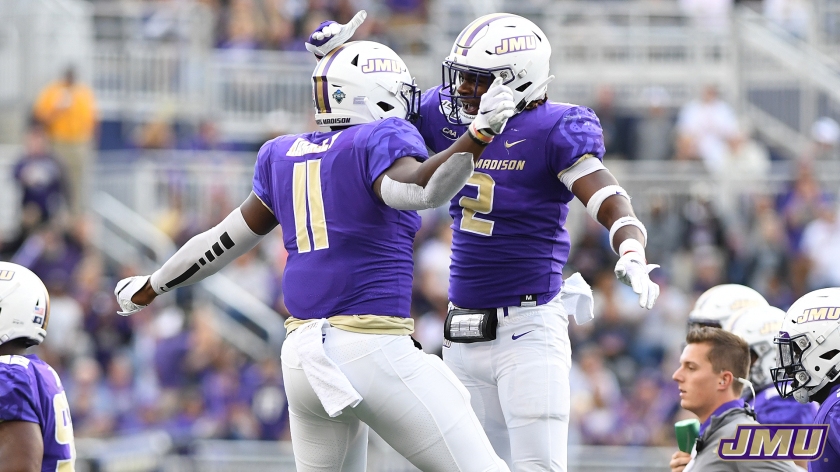 By Bennett Conlin and Chase Kiddy

The playoffs have arrived for JMU. The Dukes host Monmouth on Saturday at 1 p.m. with a spot in the FCS quarterfinals on the line.

After a week off for Thanksgiving, we’re back with our usual weekly roudntable discussion.

Let’s start with the tweet heard ‘round the JMU world.

Curt Cignetti basically said he’s not going anywhere in a recent tweet. What are your initial thoughts on Cignetti having some fun on Twitter, and do you think Cignetti may stay in Harrisonburg for the long term (at least four years)?

Bennett Conlin, JMU Sports News: I think it’s great to see Cignetti having fun on Twitter and showcasing a bit of his personality. He’s a different person than Mike Houston, and he doesn’t always share the same “T-shirt worthy” quotes, but seeing Cignetti fire off a tweet like he did this week was funny.

It also speaks to Cignetti’s goals and focus. He’s a talented coach capable of leading an FBS program, but he’s also been in coaching for a long time. Houston was never going to stay in Harrisonburg for five years if his team kept winning at the rate it was. He had higher career aspirations than leading an FCS team. Cignetti is built differently and has been around longer, and I wouldn’t be stunned to see the head coach spend 5-10 years in Harrisonburg. I also wouldn’t be stunned if he left after two or three seasons.

It’s hard to get a read on Cignetti, but he does seem like a coach willing to stick around for the long haul. That doesn’t mean JMU ends up being the place Cignetti sets up shop for the final 10-15 years of his coaching career, though.

Chase Kiddy, Master of None: I’ve talked about this a lot already this week, so I’ll be brief. Mike Houston is a good man and a great coach, but I thought it was mostly obvious — especially after his contract was restructured — that he was going to move on from JMU sooner, rather than later. He’s a young guy who’s showcased top-shelf coaching ability. He was never going to spend a decade of his coaching prime at an FCS school.

Curt Cignetti, by contrast, is older and in a different phase of his life. He values different things. He comes from a family that has enjoyed finding success away from traditional power venues. I’m not telling you Cignetti will retire and live in Bridgewater or anything, but I do think it’s more likely that Cignetti sees a full recruiting class all the way through than either of the previous two guys.

Back to the gridiron. JMU enjoyed a bye last week, and the Dukes host Monmouth this Saturday at 1 p.m. What do the Dukes need to do to take care of business this weekend?

Bennett: Limit turnovers. When JMU loses or wins close games, it normally struggles taking care of the football. If the Dukes avoid a performance like last year against Colgate, it’s very hard to see them losing in the second round of the playoffs.

If DiNucci limits turnovers like he has all season and ball carriers don’t fumble the ball away multiple times, the Dukes have more than enough talent to dominate the Hawks on both sides of the football and in the special teams battle.

Chase: Get a few stops. That’s probably it. I don’t see Monmouth’s defense consistently stopping JMU and turning this game into some sort of defensive struggle, so all JMU needs is a stop here and a turnover there, and the Dukes will be fine. JMU will probably start slow, but once the offense gets rolling, we’re going to see several consecutive possessions end with scores. Monmouth’s offense is potent, and will probably continue to be effective this weekend, but a timely turnover might end this game in the second quarter. I’m mentally approaching this weekend like it’s a Big 12 game.

Monmouth won the Big South, and it cruised by Holy Cross in the opening round of the playoffs. On a scale of 1-10, what are the chances the Hawks beat the Dukes on Saturday? Explain your logic and share why the Hawks might be a dangerous foe.

Bennett: I’ll say a 1 because I would be floored if Monmouth beat JMU, and that’s meant as no disrespect to Monmouth. The Hawks are good. They beat Albany and can move the football. The Hawks run the ball well and pass effectively. It’s a very good, and balanced, offensive attack.

There’s just a massive talent and size differential between the Dukes and Hawks. JMU’s offensive and defensive lines are bigger, better and stronger than the lines for Monmouth. JMU will wear down the Big South champs and control the line of scrimmage in the second half. I expect JMU’s defensive line to limit the push of Monmouth’s offensive front, which will alter the team’s entire offensive rhythm.

The Hawks deserve credit for a great season, but it’s likely to end Saturday. I’ll be stunned if they pull the upset.

Still, JMU should take Monmouth’s offensive threat seriously. I’m excited to see what JMU’s nasty defensive front does an offense talented. Pete Guerriero has been on my radar since the Summer of ‘18, when I was putting together the preseason All-American list with Brian and Sam at HERO Sports. The guy is a really talented tailback, and he’ll almost assuredly make a couple guys look silly this weekend. The rub for Guerriero is that football is a team sport, and his offensive line has to contend against a defensive front that is, objectively, much better than they are. Monmouth’s creativity and its willingness/ability to challenge JMU on the backend will determine how closely this game is played.

Who wins Saturday and what’s the score?

Bennett: I’ll take JMU winning 45-17. Monmouth possesses enough firepower to score some points, but the Dukes are too good in all three phases to lose to the Hawks after a bye.

This is a long question so bear with us.

JMU expects a crowd of about 17,000 on Saturday in a second-round playoff game. There’s talk every offseason about whether or not moving to the FBS would actually be better than playing in the FCS. The pro-FCS crowd frequently brings up the playoff system and competing for championships.

There’s no doubt competing for an FCS crown is better than playing in a random Dec. 26 bowl game in Bumblefuck, Iowa, but to play devil’s advocate, if the playoffs are so great, why will there be 8,000 empty seats Saturday? Why are the first few rounds borderline irrelevant when it comes to determining an FCS champion?

Dare we even ask, but …. Are the FCS playoffs overrated?

Bennett: Chase nails this answer, so I’ll be fairly quick. My answer is yes.

I love the FCS playoffs. The FCS playoffs are an absolute blast. They’re also overrated. The first round of the tournament means absolutely nothing in determining the eventual winner, and the matchups aren’t exciting unless your team plays in the game. The second round features a similar issue.

Once the quarterfinals come, though, the playoffs become better. I believe an 8-team playoff is a perfect number, and I wish the FCS playoffs stuck with 16 teams like they had a few years ago. In the 24-team system, too many mediocre teams get into the field. If Ivy League teams participated, it would help, but even that wouldn’t make the playoffs all that exciting in the early rounds.

The lack of attendance at Bridgeforth Stadium for playoff games makes me sad, but I also completely understand it. Why would a casual fan want to watch the Dukes play Monmouth? It’s a boring matchup, and the game will likely be a JMU blowout.

The FCS playoffs can be predictable. That results in a product that’s way more boring way more often than FCS fans want to admit.

Chase:  Ryen Russillo used to play a game on his radio show called “Underrated, Overrated, or Properly Rated.” And the meta of that game that always bothered me was it seemed like very few people (besides Russillo) ever understood was the word “overrated” really meant. It’s not necessarily that something sucks; it’s that there’s a gap between perception and reality.

The FCS Playoffs don’t suck, but they’re definitely overrated. We can start with the crowd stuff here — each new game is the most important game of the season, yet the playoffs have loads of natural obstacles. You’re dealing with two of the biggest, most travel-intensive American holidays; you’re dealing with cold weather during the game, and potentially inclement weather on your way to/from the game; some of the games are on Friday nights, which wipes out many fans with inflexible jobs; multiple games line up with times when students have left campus — both the first round and the semifinals — which makes a student crowd so, so much harder to attain. That’s a whole lot of nonsense to deal with before we even start talking about actual football.

I lost my fan goggles a while back, so it’s hard for me to really access the raw, unbridled West Virginia-borne fanaticism that I carried with me before I became a little-j journalist. (In a column I once wrote about fan attendance for The Breeze about seven years ago, I wrote, “I’m like the U.S. Postal Service. I’ll be in the stands rain or shine, sleet or hail.” This article has since been rewritten about 57 times; more importantly, I’ve spent most of this decade watching JMU football games from inside a climate-controlled room.) Still, it’s become more difficult over the last few years to emotionally invest in playoff games. The departure of historically significant powerhouses from the subdivision, like Georgia Southern, App State, et al, combined with the (obviously related) rise of a superpower like North Dakota State, is a two-headed, interrelated problem. It means early-round opponents often aren’t recognizable, either because they have no history with JMU, or they have no history with successful FCS football; it also means that early games can be irrelevant because we know North Dakota State is going to cruise to the title game. All together, I think these forces sap interest for fans.

We don’t consider these problems at the FBS level, because 1) there’s a much smaller number of teams, 2) all the brands are historic & recognizable, and 3) even Alabama never showed this level of dominance over the field. March Madness is fun every year because we all acknowledge how ridiculous and wild the product is. In the big picture, does anything about this FCS playoff field feel chaotic or unpredictable?

I don’t know whether or not JMU will ever get an FBS offer. I’d like to think we’re an attractive overall package to the American, but that’s a conversation we don’t need to rehash here. What I do know is this: that 2016 run was about as fun as anything I can remember, but that wasn’t because JMU won… it’s because it was all new. It had been 10 years since JMU was truly, substantively good. Now, it’s old hat. JMU is a national FCS brand, and we all know what the expectation is. That leads to a wholly different level of fan engagement in December.