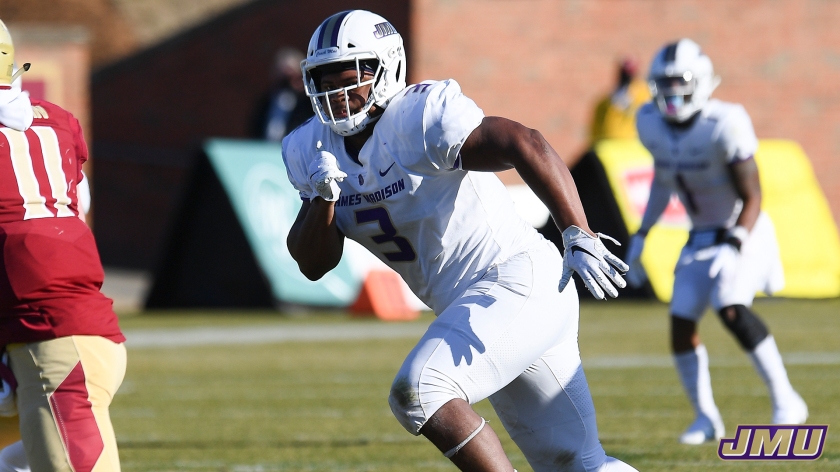 JMU football hosts a team from North Dakota this weekend. While it’s not the Bison (maybe next week?), the Fighting Hawks should excite JMU fans.

This game has a chance to be a battle. UND defeated top-seeded South Dakota State earlier this year. It blew out Missouri State to open its postseason. The team was considered one of, if not the best, teams in the country earlier this spring.

When UND plays well, it can beat anyone.

JMU enters Sunday night’s showdown off a 31-24 win over VMI. The game was competitive, but it wasn’t quite as close as the final score indicates. The Dukes led by double digits from almost the entire final 40 minutes of the game.

VMI is a solid team, but there’s no debating North Dakota is a tougher test. Here are three keys to this weekend’s FCS quarterfinal matchup.

Can JMU force turnovers and mistakes from a sound foe? If the Dukes can’t create takeaways, can they at least limit mistakes? Cole Johnson tossed a pair of interceptions against VMI, but the Dukes responded with three interceptions of their own.

Winning the turnover battle is critical for a JMU team that isn’t as dominant as it was in 2016, 2017 and 2019. The Dukes are good enough to beat anyone, but they’re also capable of falling to any team still in the field. JMU can’t afford to give UND an edge in the turnover battle, given how few mistakes the Fighting Hawks make per game.

Which team can make a big special teams play? Can either side break off a return or block a punt? North Dakota has blocked three field goals and two punts this spring.

On paper, there’s not a huge gap between either team. Turnovers and special teams should play an important differentiating factor, and that’s arguably an area where UND is at its best. JMU needs to play clean football to advance.

JMU’s bread and butter is running the football. The Dukes ran for 305 yards against VMI, 99 of which came on a Jawon Hamilton touchdown.

I’m not sure the Dukes can get 300 yards on the ground against UND, but they need to stick to their strength. That means leaning on Percy Agyei-Obese and Hamilton. The two backs are matchup problems, and they should be heavily involved Sunday.

It’s unclear how much run Latrele Palmer or the other backs might receive, but there are options outside of Agyei-Obese and Hamilton. It’s a loaded backfield, and the running backs are critical to JMU’s success.

The Dukes don’t need to be perfect in the rushing game, but if they can average 4-6 yards per carry, they’re going to be in a good position to win. And hey, more 99-yard touchdowns would go a long way, too.

200 rushing yards and a pair of touchdowns should put JMU in position to win, especially if Cole Johnson avoids turnovers.

The freshman wide receiver leads the team with 371 receiving yards and three touchdowns. He snagged a 62-yard touchdown in the win over VMI, and finished with four catches for 132 yards. He caught four balls for 88 yards in the regular-season finale over Richmond.

Wells Jr. pairs well with Kris Thornton. Both players have game-breaking potential, and I’m keeping a close eye on Wells Jr. this week. He’s good enough to record a few chunk plays, which could keep UND from stacking the box against the run.

Wells Jr. absolutely has FBS potential as a receiver. Instead, he’s one of the top young players at the FCS level. He’s an impact player, and JMU should seek him out Sunday.

At this stage of the postseason, every team can win. A few big plays here and there are often the difference. Wells Jr. is one of JMU’s best big-play threats.