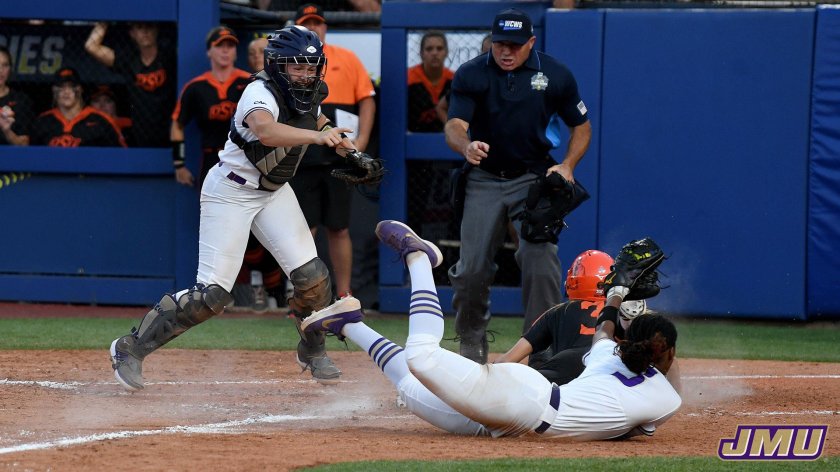 “She could run through a brick wall, and I’d be right behind her.”

Lynsey Meeks told the ESPN broadcast crew, and everyone watching at home, how much she loves Odicci Alexander.

If you’re a JMU fan, you’re probably running through the wall behind Alexander too.

Alexander isn’t just one of the best JMU athletes in history. She’s a champion. She’s a star.

For much of her career, Alexander was considered an elite player. A top-tier CAA pitcher and hitter. Ordinarily, she’d be the face of a program.

Only JMU had Megan Good. And Megan, well, she was great.

There’s an argument that Good is the best athlete in the history of JMU athletics. Playing with her, and playing the same position, isn’t easy. Alexander thrived, but Good logged the majority of the key innings as Alexander stepped up when asked, even if it wasn’t as much as she probably wanted.

This season, Alexander is the team’s unquestioned ace.

She admittedly didn’t have her best stuff, but that didn’t stop her from holding No. 5 Oklahoma State to a season-low one run in a 2-1 win. She also held No. 1 Oklahoma to a season-low three runs Thursday.

Thanks to elite pitching performances, Alexander and the Dukes are the first unseeded team to win their first two games of the Women’s College World Series. They’re one win from making the WCWS Finals.

Alexander’s outing was incredible, but one play stands above the rest.

Oklahoma State put runners on second and third with no outs after an unfortunate obstruction call during a rundown. The Dukes were in trouble, only up a run in the top of the seventh. The game was very much in doubt.

Alexander steadied. She got a short fly out to left field.

Then, with the game on the line, Oklahoma State laid down a bunt. Alexander fielded and she could’ve possibly flipped it to catcher Lauren Bernett, but it wasn’t a guaranteed out that way.

The fifth-year senior, who came back for one last ride with her teammates, grabbed the ball and dove head first toward the runner. She extender her left arm, tagging the base runner befoe she scored.

Alexander landed hard, with her right arm taking plenty of impact as she hit the ground. The play was special, and she put her body on the line for a chance to win.

The play of the JMU sports season. https://t.co/ytosILZwux

Odicci Alexander was built for a Friday night under the brightest lights in softball, even if this is her first time on the stage.

But the exceptional play and out doesn’t mean much if you don’t follow it up.

JMU’s ace took a minute. She collected herself as teammates built her up.

Eventually, she came ready. Alexander forced a pop up to shortstop Sara Jubas on an 0-2 pitch. The redshirt junior caught the ball, and the Dukes celebrated for the second time in as many days.

It’s hard to overstate how great Alexander has been the last two days/weeks/months. She’s special, and she’s showing the nation.

The ride is far from over. JMU will rest Saturday, and boy, is that rest well earned.

A rested Alexander is dangerous. A team that’s 2-0 in Oklahoma City is clearly dangerous. The Dukes are 6-1 against the Power 5 this spring, winning every game away from home.

Unseeded? Sure. But the Dukes believe they’re the best.

There’s a ton of highly competitive softball remaining and winning a national championship with the strength of field left will be a monumental challenge.

With Odicci Alexander on the mound, though, the Dukes are ready to run through brick walls. They’ve already ran through two.