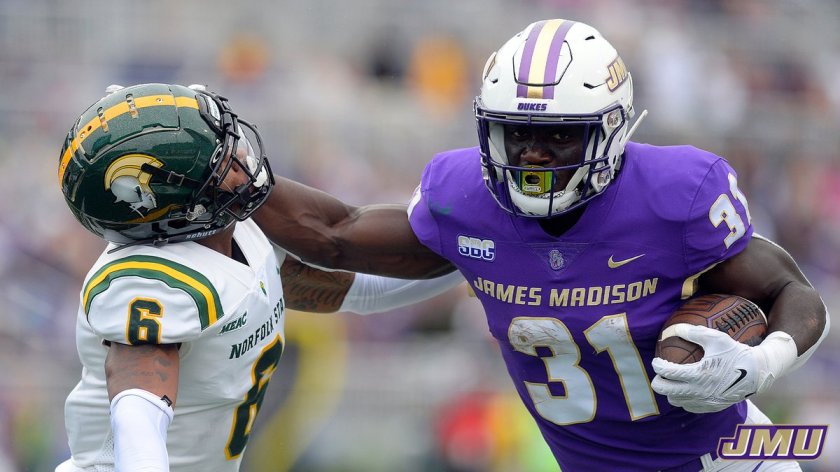 No game for the Dukes this week, but we still figured it was worth cranking out a roundtable discussion. JMU (5-2, 3-2 SBC) will return to action next weekend at Louisville.

While it’s always a bummer without a JMU game, the Dukes are in desperate need of an extra week to rest and recover, as injuries are mounting. Let’s chat about JMU’s future, and the Dukes’ 26-12 loss to Marshall.

What’s your top takeaway from JMU’s loss to Marshall?

Jack: I could go the pessimistic route and bring up the lack of depth, the questionable coaching, but I am going to go with the defense. JMU just ran into a buzzsaw last week against the Georgia Southern offense, which wasn’t a reflection of this Dukes defense. The Dukes have had a stout defense all year and yet again they came through with a solid performance on Saturday against Marshall. They were put in extremely tough situations and were defending short fields. They held their own and did what they needed to do to give the Dukes offense opportunities to tie and/or win.

Bennett: Todd Centeio is really good. I knew JMU’s starting quarterback was having a phenomenal season, but it was clear how important he is to the team when he wasn’t able to suit up against Marshall. Without Centeio, JMU had its worst offensive showing of the season, committing five turnovers and going 0-17 on third down. It’s hard to replace one of the best quarterbacks in the SBC.

Through seven games, give JMU a letter grade (A through F) for its performance this season

Jack: B-. JMU had a picture perfect start to the year, outside of 8 minutes vs. App State but the Dukes erased that with a monumental comeback for the JMU history books. It comes down so much because of losing these last two games, which, both in the moment and looking back, were extremely winnable.

Bennett: I’ll give the Dukes a B. The start to the season was a clear A, but they’ve sputtered the last two weeks. Still, JMU is 5-2 in its first full FBS season. The Dukes are solid on both sides of the football, and they broke into the AP Top 25. They’re still in the mix in the Sun Belt East with three conference games left. It’s been a good seven games.

Who would be your offensive and defensive MVP through seven games?

Bennett: Offensively, let’s go with Centeio for obvious reasons. He’s been a stud as JMU’s quarterback. Defensively, I’ll take Jailin Walker. The linebacker has 42 tackles, 2.5 tackles for loss, and 1 sack. He also has two huge interceptions, including one returned for a touchdown. When Diamonte Tucker-Dorsey transferred, Walker stepped into his role on the defense, and he’s delivered with a special season.

Jack: It’s not fair! Bennett stole both of my answers!

In an effort to spread the love here I’ll switch it up. Offensive MVP right now is Percy Agyei-Obese. Despite missing the App State game and playing limited snaps vs. Texas State, he leads the team in rush yards with 556 and is tied for second in rushing touchdowns with 4. Percy is also averaging 6 yards per touch and for the entire season, on his 92 attempts, he has lost just nine yards. He has been a difference maker in the backfield.

Defensive MVP the linebacker that plays opposite of Jailin Walker, Taurus Jones. Jones has been amazing this season, with 59 tackles, about eight per game, he has been a perfect one two punch with Walker. On top of leading the team in tackles, he has 8.5 tackles for loss (leads the team), one interception and has forced two fumbles and recovered two as well.

A few NFL teams have visited JMU practices in recent weeks. Which draft-eligible Duke would you most like to see your favorite NFL team draft in 2023?

Bennett: As a Detroit Lions fan, I’m tempted to say Centeio. The Lions lack quarterback depth, so it’d be fun to see the signal caller have a shot to earn a roster spot. I’ll say defensive lineman Jamare Edwards, though. The Marshall transfer has 27 tackles, seven tackles for loss, and three sacks. He produced at Marshall, and he has produced at JMU. The versatile lineman would be an intriguing prospect to add to one of the NFL’s worst defenses.

Jack: As a Seahawks fan I would love to see Kris Thornton. I think he could take over for Tyler Lockett in a few years and in the meantime be a fantastic WR3. Exactly what the Seahawks need! If I am looking down the road and can project growth I would love either of these linebackers to come to Seattle and make an impact. Their play would pair wonderfully with Jordyn Brooks and allow Seattle to play more 2 linebacker sets with added secondary help.

No game this week, but a solid Louisville team faces JMU on Nov. 5. Think the Dukes stand any chance of winning?

Bennett: I think it’s dependent on Centeio’s health. With him healthy, I’ll say yes. I’m not sure this particular JMU team is built to win against a solid ACC team without its starting quarterback. It would be a huge challenge with Centeio, but he’s shown that he’s experienced and dynamic enough to give JMU a fighting chance. If he’s unavailable, it’ll be a major test to stay within 10 points.

Jack: They are capable of winning. Of course it would be a whole lot easier if Todd Centeio is in and he can play at the level he has all season. But even with another QB in there, I think the Dukes are capable. Just have to come in with the right game plan and make the necessary adjustments as the game goes on. Need an App State second half type game, honestly.