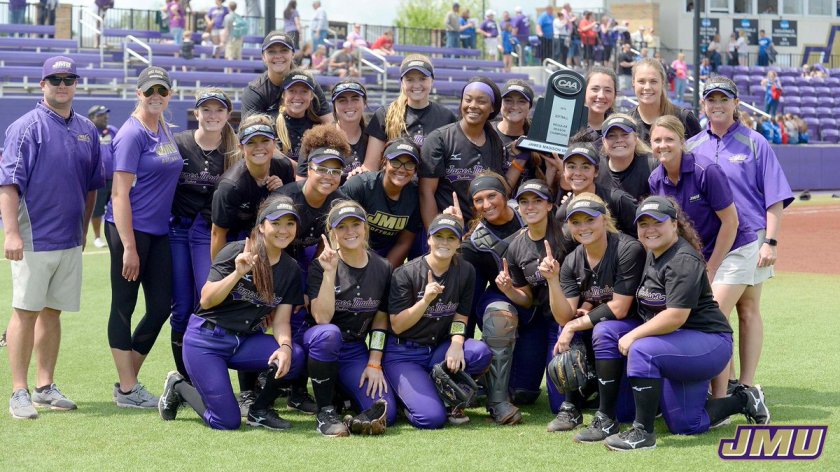 Easy sweep of Drexel – JMU beat the Dragons 14-0, 9-4 and 12-2 in the three games this weekend. The Dukes easily beat a lesser CAA foe and improved to 41-7 overall and 17-1 in the CAA. They’re clearly the best team in the conference.

This JMU team might be better than the 2016 team that made the NCAA Super Regionals. The team is the most complete group in program history, and while it’s not quite as good as the 2016 squad in a few areas, there’s a chance this team makes the Women’s College World Series. Let’s take a deeper look at why this team is so special. We’ll start with the lineup.

This is the lineup from Sunday’s 12-2 win over Drexel. I’ve included the season stats (JMU has played 48 total games) for each player next to their name.

That’s the deepest JMU lineup in years, and it doesn’t even mention options like Victoria Figueroa and Natalie Cutright as potential pinch hitters off the bench. The team also has speed on the bench in Sydney LaScola and Kelsey Brown. They’re a combined 13-16 on stolen base attempts.

Let’s see how this lineup compares to the Dukes’ 2016 NCAA Super Regional lineup. Here’s what the Dukes used in Game 3 of their series with LSU. I’ve also included their 2016 season stats. The Dukes played 56 games in 2016.

JMU’s 2016 team played a similarly tough schedule, lost only six games in 56 contests and was one at-bat away from making the Women’s College World Series. Tremendous defense, timely hitting and superb pitching made that team elite, but this 2019 lineup is unbelievable. JMU scored 320 runs in 56 games in 2016. The Dukes have 386 runs in 48 games this season. The entire lineup is scary.

The No. 1, 8 and 9 hitters in the 2019 lineup all hit to reach base and score runs. They’re not going to hit a lot of home runs, but they set the table for the 2-7 hitters. JMU’s 2-7 hitters have 69 home runs and 270 RBIs on the season. That’s preposterous. The Dukes’ offense is elite, and that’s something they haven’t had to this extent in recent years. I discussed the team’s poor hitting in the postseason in my preseason preview. Here are a few key quotes from that piece:

“The Dukes aren’t struggling to advance past the NCAA Regionals because of their pitching, it’s been the bats that let the Dukes down in critical moments … JMU can’t expect to hold NCAA Tournament teams to under three runs in every game. The Dukes need to be able to win games by scoring 5+ runs. If the Dukes can score five runs against SEC teams with their pitching staff, they’ll have a great chance to make it to Oklahoma City.”

I stand by this take. JMU’s pitching alone can’t take it to Oklahoma City. Megan Good and Odicci Alexander have been great in the circle, but they aren’t going to keep the top-15 teams in the country under three runs in every game. The Dukes will have postseason opponents get closer to 5-10 runs in some games, because the best teams in the country are elite offensively. Let’s see what else I said in the preview.

“This team is good enough to make the Women’s College World Series. The pitching staff will be among the best in the country. If the Dukes get production from the top and bottom of the lineup, this team becomes a national title contender. If the Dukes rely solely on the middle of the lineup and their pitching staff, the Dukes will settle for an NCAA Regional appearance.”

Here’s the thing: JMU isn’t relying solely on the middle of its lineup, AND the middle of the Dukes’ lineup is the best in program history.

I didn’t anticipate this type of season from Logan Newton, and I didn’t see Hannah File being good enough to move Sara Jubas around in the lineup. Instead of using Jubas as a leadoff hitter, the Dukes are able to let her drive in runs from the No. 6 spot. I also didn’t expect this level of production from Gordon, Good and Alexander. I knew they’d be good, but their level of production is astounding.

My preseason preview shared doubts about the top and the bottom of the lineup. I specifically referenced Madison Naujokas as a player to watch at the end of the order.

“Last season, Naujokas underwent a sophomore slump. After batting .288 as a freshmen, she batted just .206 last season. Despite the inability to get hits, she led the team in stolen bases (11) and walks (28). She put together an on-base percentage of .360, which was actually a better mark than Jubas’ despite a batting average nearly .100 points lower.

Naujokas hasn’t just gotten “a few more base hits,” she’s raised her batting average from .206 to .350. Let that sink in. JMU’s No. 9 hitter is batting .350 on the season. She’s effectively a leadoff hitter in the No. 9 spot. She adds value by getting on base and scoring runs. She was an offensive liability last postseason. Now, she’s an offensive asset.

Kierstin Roadcap has also stepped up. While her batting average is just .260, she’s hit seven homers and added 41 RBIs, which is 16 more than she had all of last season. She’s a power hitter at the No. 7 spot. Madyson Moran was awesome in the No. 7 spot in 2016, but this 2019 lineup is significantly stronger in spots 6-9 than the 2016 squad. That’s incredibly important in postseason play, as any combination of batters in an inning can yield runs for JMU. This wasn’t the case in previous seasons.

It wouldn’t be a true deep dive without discussing the team’s pitching, so let’s discuss what the Dukes have in the circle. Here are the stats for the team’s three pitchers in 2019.

Before the season, I said:

“Matt Weyrich of The Breeze did some good digging to find that JMU and Florida are the only teams in the country to have six consecutive seasons with a team ERA under 2.20.”

Well, the Dukes are going to make it a seventh consecutive season, barring anything insane. JMU’s team ERA is at 1.70 through 300 1/3 IP. It’s been a solid season in the circle for the team, although this year’s staff doesn’t quite measure up to the team’s 2016 unit. JMU used just two pitchers for more than nine innings that season, but man, those two were amazing.

The team’s ERA, against a slightly better schedule that includes NCAA Regional and Super Regional games, was 1.15. That’s unbelievably good. Megan Good is still on this year’s roster (obviously), but she hasn’t been as dominant as she was in 2016 or even 2017, when she posted a 0.63 ERA in 244 2/3 IP.

This year’s staff isn’t as effective as the 2016 unit, but it’s still an elite group. Megan Good has shown better form in recent outings, and Odicci Alexander is a better pitcher than she was in her first two seasons in Harrisonburg. Not having Mickey Dean around to call the pitches hurts, but the Dukes have shown the ability to excel in the circle under Loren LaPorte.

It’s also important to note that Buresch has thrown 43 innings, and both Good and Alexander are well below 200 IP on the season. Her contributions have allowed Good and Alexander to both stay fresh, though, which is rare for this time of year.

Expect Buresch to ride the bench in postseason play, as Good and Alexander throw almost all of the innings. That’s not a slight to Buresch, but teams really only need two elite pitchers in postseason play, and Buresch has struggled in limited action against ranked teams. If Good gets closer to matching her 2016-17 self, the NCAA Tournament field should be scared. Even if she doesn’t, JMU’s top pitchers are well rested (thanks to Buresch) and plenty good enough to keep it in games and allow the offense to go to work.

The seeding dilemma – Unfortunately for JMU, this year’s schedule hasn’t been exceedingly good. The nonconference slate was very solid, but CAA opponents are RPI killers. JMU ranked 14th in the RPI heading into this week, and a top-16 seed is within reach. The bad news is that the Dukes don’t look like they’ll have any chance of earning a top-8 seed like they did in 2016 when they were ranked No. 7. This means JMU will have to travel to play one of the best teams in the country in a Super Regional, assuming it gets that far. This is tough. Beating a top-5 team on the road in a best-of-three series is challenging.

The bottom line – JMU’s team might be the best in program history, but a weak conference schedule makes a spot in the Women’s College World Series tougher to attain. This team is competitive and the goal all season has been making the WCWS. That goal is going to take a spectacular postseason, but it’s within reach. The rest of the year is going to be thrilling.

Up next – JMU closes the regular season with three games at Delaware this coming weekend.